Somali Pirates: The Attacks of Early October 2011 and Setting the Pirate Stage

The season of increasing Somali pirate attacks in the Indian Ocean has arrived. It is useful to see how early activity is shaping up and where NATO sees "Pirate Action Groups (PAGs)" forming up. So, take a look at the following:

From the NATO Shipping Center All Alerts, this list of October 2011 Somali pirate action and the accompanying map showing the incidents:

***This vessel managed to evade hijack***
***The vessel is safe***
The Pirate Attack Group is still in the area.
Vessels are advised to exercise extreme caution when navigating within 100 nautical miles of the position given in this report and maintain maximum CPA with any ship acting suspiciously.
Experience has shown that to transit W of 60E significantly increases the risk of piracy, although attacks have and will occur E of this area.
MSCHOA advises all vessels navigating in the Indian Ocean to consider keeping East of 60E when routing North/South and to consider routing East of 60E and South of 10S when proceeding to and from ports in South Africa, Tanzania and Kenya.
Vessels should report to UKMTO Dubai *** on entering the UKMTO Voluntary Reporting Area (VRA) bound by Suez,78E and 10S.
Thereafter vessels should report their position, course and speed daily.

Throughout the UKMTO VRA vessels should implement Self Protective Measures in accordance with Best Management Practices. For further details, please see www.mschoa.org. or http://www.shipping.nato.int/Pages/BMP.aspx

Now, as set out in Where the Somali Pirates Operate and Why, we can safely assume the pirates are aware of the more heavily traveled "sea lanes" or shipping routes that ships use to transit the Indian Ocean and will send out PAGs to allow interdiction of unwary, underprepared, low in the water and slow speed ships traveling those lanes. 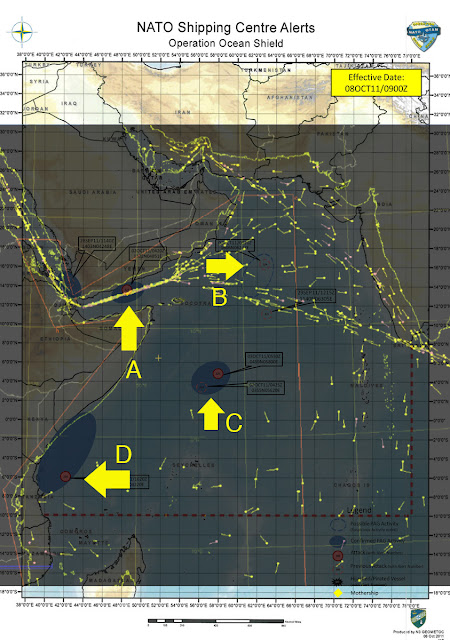 You would expect then, that the pirates might have 4 or 5 areas where they would find the "hunting" particularly good.

And, if you overlay 2010 shipping info over the current NATO activity map, as I have done nearby, you see that the early PAGs are setting up at areas where the shipping is including a rich area (area marked "B" on my map) where shipping in and out of the Arabian Gulf is "choked" into a small area by the Strait of Hormuz.

Similarly, Area "A" is traffic "choked" by the narrow Bab el Mandab entrance/exit from the Red Sea, Area "C" is a catch point for traffic diverting to east on Madagascar, and Area "D" covers the coastwise chokepoint of entry into Kenya, Tanzania and the Madagascar Channel.