You can download the latest U.S. Navy Office of Naval Intelligence reports here, including the "Piracy Analysis and Weekly Warning" - the latest of which runs to 27 Oct 2011. Generally, Somali piracy seems to have slowed, with but one reported attempt: 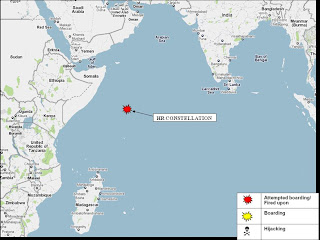 (U) Vessels Fired Upon/Attempted Boarding:
(U) INDIAN OCEAN: Cargo ship (HR CONSTELLATION) fired upon by pirates in two skiffs on 20 October while approximately 275 nm northeast of Port Victoria, Seychelles. One of the two skiffs approached to within 50-100 meters of the vessel. The armed security team on board the cargo ship fired warning shots and the skiff broke pursuit with the pirates returning fire. The crew had mustered in the safe room while the Master, chief mate, and security team remained on the bridge. The Master reported that the vessel had implemented version 4 Best Management Practices, reported to UKMTO, and had conducted weekly counter-piracy drills. The master later reported the vessel safe. (UKMTO, Owner)

One of the reasons successful attacks are in decline is contained in the report - in the part I emphasized above - merchant ships carrying armed guards and are shooting back at the pirates instead of playing the role of passive victims and letting themselves be taken by ragtag pirates.

It should be noted that the British government has now authorized the use of such armed teams on merchants carrying their flag. See here for a Navy Times report:


Ships sailing under Britain’s flag will be permitted to carry armed guards on some perilous routes to combat the threat from pirates, the prime minister said Sunday.

David Cameron said Britain was reversing its opposition to the use of weapons aboard ships, amid mounting concern about the risks of vessels and crew being seized by pirates — particularly off Somalia’s coast.

Cameron’s office said the use of weapons on British-flagged ships is banned under firearms laws, but that new rules would be in place within a month.

Britain’s announcement follows the decision in February of the International Chamber of Shipping, the major trade association of ship owners, to support members hiring private security companies to provide protection.

“The evidence is that ships with armed guards don’t get attacked, don’t get taken for hostage or for ransom, and so we think this is a very important step forward,” Cameron told the BBC during a visit to a Commonwealth summit in Australia, where he discussed the issue with leaders from the Seychelles and Mauritius.

The ONI PAWW report is important, too, because of its maps representing the weather impact on possible pirate activity, such as the one below (though, to be candid, in between monsoons, the weather in the upper Indian Ocean, Gulf of Aden, etc, is generally pretty favorable to pirates operating in small boats which explains a great deal of their success over the years during those non-monsoon months): 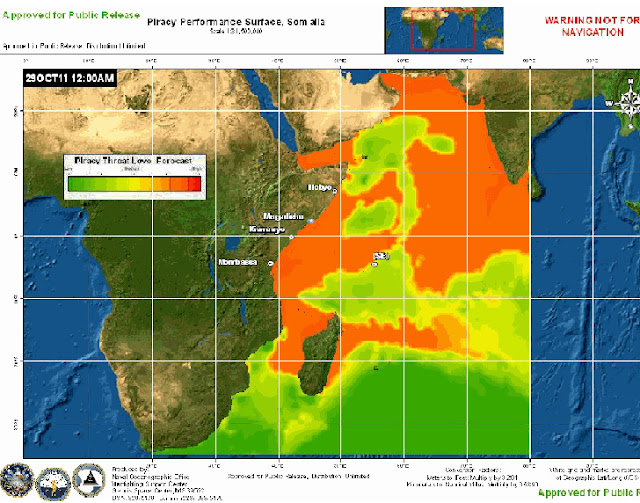