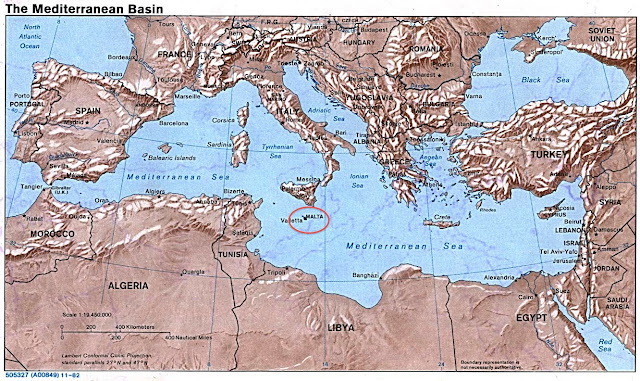 As you may recall, Israel has a big offshore natural gas find in the Eastern Mediterranean as set out here, which has created a row with its neighbor, Lebanon (some suggest Iran's hand is involved in this). In addition, drilling off Cyprus has Turkey doing its own "exploration" under armed naval escort. Tension is up, ugly words are spoken. Billions of dollars are at stake.

See Saturn 5's coverage at Bosphorus Naval News here and the links therein for more on the Turkey and Cyprus issue.

Greece also is looking at issuing exploration permits in its offshore areas, and,
well, now, there are new sparring partners, as little Malta issues permits for offshore exploration and Italy jumps in claiming rights to some of the same undersea zones. See here:


Interest in Mediterranean exploration has fostered great hopes but has also led to increased tensions in the region. US independent Noble Energy's large gas discoveries offshore Israel, have shed light on the potential of offshore acreage in the region. Investors are now looking to Cyprus, while Lebanon is planning its first offshore licensing round in 2012. On October 6, Greece also announced that it will put three blocks in the Adriatic on offer for exploration in 2012. Previously, Greece's development minister, Kostis Hatzidakis, said that the government had plans to start exploration for oil in the Aegean Sea.

However, this has proved to be a poisoned chalice with regard to diplomatic ties in the region. Turkey's relationship with Israel has disintegrated and it has opposed Noble's drilling plans off Cyprus, as it has yet to formally agree its maritime borders with the island-state. It has also threatened to place military vessels in the Mediterranean Sea to impede what it considers to be provocative exploration. In addition, the long feud between Greece and Turkey over maritime borders could make the situation worse, particularly in terms of exploration in the Aegean. Lebanon and Israel have similarly yet to agree on a maritime border.

In the case of Italy, tensions with Malta have risen following the island's publication of a tender for oil exploration in the Ionian Sea - in areas claimed by Italy. Meanwhile, Malta is also in dispute with Libya over its southern maritime borders. Furthermore, environmental concerns over a possible oil spill in the Mediterranean's closed sea could also hamper upstream activity in the region.

With recent discoveries in the eastern Mediterranean and further ongoing exploration already taking place offshore Italy, Albania, Croatia, Montenegro (and possibly Greece in the near future), we believe that exploration on Italy's side of the Ionian Sea is likely to attract significant interest. Nevertheless, this raises political tensions and a great deal of diplomacy will be required if serious disputes are to be resolved or avoided.

Nice turf war you got there, fellas.

There's an element of The Treasure of the Sierra Madre in all this. Mixed in with international threats, of course.