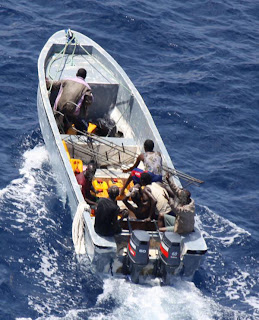 
Piracy has risen to record levels in the first nine months of the year with Somali pirates behind 56% of the 352 attacks, the International Maritime Bureau said Tuesday.

"Figures for piracy and armed robbery at sea in the past nine months are higher than we have ever recorded in the same period of any past year," said Pottengal Mukundan, Director of IMB. The IMB's Piracy Reporting Center has monitored piracy worldwide since 1991.

More ships, however, are escaping Somali pirates with hijack attempts "being thwarted by strengthened anti-piracy measures," the report said.

Despite the Somali pirates initiating more attacks, which amounted to 199 through September, up from 126 last year, and going further out in the Red Sea and the Indian Ocean, they "are managing to hijack fewer vessels," the report said.

"Only 24 vessels were hijacked this year compared with 35 for the same period in 2010," the IMB said.

"Policing and interventions by international naval forces," as well as "careful consideration of the crews' retreat to a 'citadel' and other onboard security measures" were credited for the reduction in hijackings off Somalia.

What the IMB did not say, or what was not report in the piece if it was said, is that a large number of attempted attacks have been turned away by shipboard armed security teams.

As of today, no ship with an armed security force on it has been hijacked. What is also unreported is that the pirates continue to expand into new areas, apparently in an effort to find ships with lowered security levels because they are out of the recognized piracy danger areas. Thus, the expansion into the lower Red Sea (weather also being a factor), along the coast of Pakistan and India and offshore Tanzania and Kenya.

With an adequate mothership, a pirate team can cover a lot of the Indian Ocean. Of course, as as been discussed before, they really need to stick to known sea lanes to find the most targets.
Posted by Mark Tempest at 10/18/2011 10:33:00 AM