Worldwide Energy: Turkmenistan has a great big gas field - #2 in the world 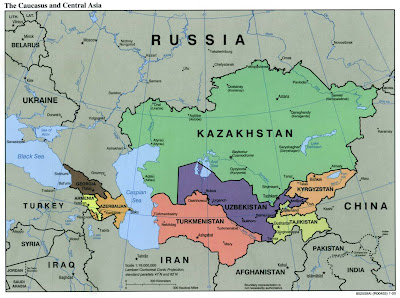 The Oil & Gas Journal reports another one of those nasty fossil fuel finds that drives the gloom and doom "We're running out of energy" crowd insane, in GCA: Turkmenistan's Iolotan gas field is world's second-largest :

“Turkmenistan’s gas reserves are more than enough for any potential demand over the foreseeable future, whether it be from China, Russia, Iran, or Europe,” Gillett said.

However, Gillet said estimates of the central Asian nation’s reserves could increase even more, noting that in addition to South Iolotan, the country’s Yashlar field has substantial gas, too.

For the geographically challenged, the map above will help you locate Turkmenistan.

Expect big pipeline investments from the Chinese. Pipeline rights through a couple of other 'Stans should not cost all that much.