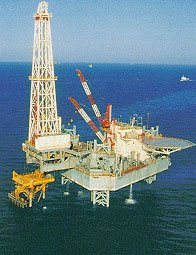 Need gas and oil? Offshore Virginia (and by extension, North Carolina and Florida) may be inevitable according to this:

Milton Copulos did not mince words Monday at a VIP forum on possible drilling for natural gas and oil off Virginia’s coast. “Sooner or later, we are going to have to do it,” said Copulos, president of The National Defense Foundation, a Washington think tank. The government, he said, can either start the drilling process now, with environmental protections in place, “or when people are shooting each other in gas lines.”

At that desperate point, Copulos said, “We’ll have to say, 'Sorry, tree-huggers, but we’ve got to get busy.’”

I'm sure there is that NIMBY breaking point, but I don't think we've hit that price barrier yet. And, as for the national defense aspect of being dependent on other nations, well, I don't think that lesson has been fully brought home yet...despite the past and current battles that are "All about oil!"
Posted by Mark Tempest at 6/06/2006 10:04:00 AM