Most interesting question of the week 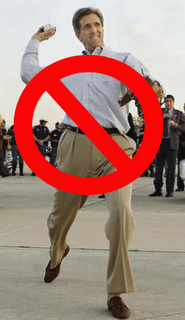 'They lied and lied and lied about everything,' Mr. Kerry says in an interview in his Senate office. 'How many lies do you get to tell before someone calls you a liar? How many times can you be exposed in America today?'

Is it seared, seared into your memory?

And I don't give a damn that you have that hat.

And, yes, I'm still mad about his 1971 Senate testimony much of which was based on the lies of men who were frauds and never served in Vietnam in the capacities in which they claimed. See here and the book Stolen Valor (found here). Sample reviewer quote:

I have never been so moved, so impressed, and so deeply changed in my perspectives by any piece of writing as I have with Stolen Valor. (I am an associate professor of English with over fifteen years experience teaching writing.) It genuinely gave me a new positive perspective on my own military service (Vietnam-era) and a massively altered understanding of the profound disservice done to our country and veterans by the media, protesters, and imposters.

For more on the "Winter Soldier" fraud, see here. For example:

o Kerry's used "testimony" from the VVAW's "Winter Soldier Investigation" as the basis for his war crimes charges, although none of the witnesses there were willing to sign depositions affirming their claims. Later investigators were unable to confirm any of the reported atrocities, and in fact discovered that a number of the witnesses had never been in Vietnam, had never been in combat, or were imposters who had assumed the identity of real veterans.

o The deception extended to the VVAW leadership. Executive secretary Al Hubbard claimed to have been an Air Force captain wounded piloting a transport over Da Nang in 1966. Hubbard was actually a staff sergeant who was never assigned to Vietnam.

Stolen Valor should be required reading in our schools as it bares the template used to attack the vast majority of our servicemen and their honorable service. As we see the pattern being invoked again and again (Jesse Macbeth anyone?) in today's headlines - Abu Ghraib and now Haditha being compared to My Lai, for example, the wholesale tarring of all the services for what were the acts of less than .1% of the force and who are currently being investigated or tried), we witness the continuing harm wrought by Mr. Kerry and his testimony "... in fashion reminiscent of Genghis Khan..."

I don't care if he was in Cambodia on Christmas eve or any other time. I assume that he deserves every medal he claims. I was almost willing to give him the benefit of the doubt that his saga of his flying dog* was just a big old sea story... except given what it says about his general truthfulness...

But I have served with those who served with him and who are members of the SwiftVets who have charged him with falsehoods and exaggeration and I would trust them with my life and not John Kerry.

I have served with those who served well and honorably in Vietnam, and seen the damage done to them by the sorts of lies and falsehoods Mr. Kerry spread.

As a off-the-coast Vietnam vet, I have felt the effect of his words before the Senate.

Lying about a hat? He has far more to answer for than that.

And I will never forget. 'Cause it's "seared" in my memory.


*for those who may not recall the tale of Mr. Kerry's flying dog- before the 2004 election, Mr. Kerry was asked by the Humane Society if he had ever had a pet. Here's the tale:

Q. "Do you have any pets that have made an impact on you personally?"

Mr. Kerry's Answer (and I am not making this up):

"I have always had pets in my life and there are a few that I remember very fondly.
When I was serving on a swiftboat in Vietnam, my crewmates and I had a dog we called
VC. We all took care of him, and he stayed with us and loved riding on the swiftboat
deck. I think he provided all of us with a link to home and a few moments of peace and tranquility during a dangerous time. One day as our swiftboat was heading up a river, a mine exploded hard under our boat. After picking ourselves up, we discovered VC was MIA. Several minutes of frantic search followed after which we thought we'd lost him. We were relieved when another boat called asking if we were missing a dog. It turns out VC was catapulted from the deck of our boat and landed confused, but unhurt, on the deck of another boat in our patrol."
***
... Ask him to draw pictures of where the boats where and how high the dog flew and to opine on how large an explosion it would take to launch a dog through space and yet apparently do no damage to his boat or crew. You might ask if the boat that received the dog saw the mine explode and yet only called him about the dog and not to see if he needed any assistance in recovering from the blast. I mean, if it were me on the boat that received the dog and I hadn't seen or heard the explosion and a dog suddenly appeared on the deck of my boat, I would have been thinking "miracle" and not quizzing my fellow boat skippers about whether they were missing a dog.

If he asks what possible relevance the flying dog has to the campaign, turn the question on him by saying something like, "I'm not sure, but aren't you the guy who wrote the response to the Humane Society question to presidential candidates? Why did you think it was relevant?" If he tries to claim it was just a little "shaggy dog" story, ask him what other things he has said fall into the same category.

Yes, Mr. Kerry, 'How many lies do you get to tell before someone calls you a liar? How many times can you be exposed in America today?' If you are going to lie to the Humane Society on something som minor as pet ownership, what sort of tales will you weave over bigger matters?

You can sue me if you want. But I remind you that truth is an absolute defense.