A warning for the Northern Arabian/Persian* Gulf 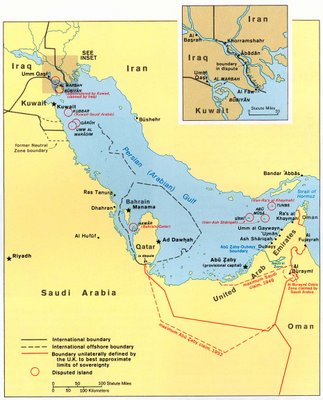 Government vessels of every nation state may query commercial vessels requesting information concerning the vessel’s identification and the activity in which it is engaged.

However, we have received an increasing number of reports from commercial vessels, including fishing vessels, of incidents of harassment by small craft. These incidents are occurring in the Northern Persian Gulf. . The small craft have an official look about them and some are clearly armed. Persons on board the small craft, representing themselves as Iranian authorities, have coerced the operators of the commercial vessels to allow them to board. Many of these boarding have resulted in the mental and physical abuse of the master and/or crew of the commercial vessel, up to and including extortion and armed robbery of Ship’s equipment; Cargo; Personnel property; and Cash.

Although no deaths have been reported, the approaching onset of an active fishing season raises the possibility of more incidents of this nature.

While we do not in any way encourage physical resistance to an armed assault, we do encourage vessel owners and operators to consider carefully the areas in which they operate or transit.

You know, like stay farther away from Persia uh- Iran.

* Iran has now banned The Economist magazine for referring to the the sea area off Iran as "the Gulf" instead of as the "Persian Gulf" on a map in a recent issue as reported here. The Persian JournaL says that as a result, nothing in The Economist can be trusted:

Why should anyone trust Economist magazine reports anymore, when they 'alter the historical fact' to appease arabs today, tomorrow they will alter the news to appease another readers. That makes magazines like Economist nothing but just 'another worthless tabloids'.

In the mean time, Iran has banned The Economist magazine for describing the Persian Gulf as merely "the Gulf" in a map published in the latest edition, state television reported late Wednesday.

I kinda thought "the Gulf" was sorta of a nice compromise, but there seems to be no pleasing some people. I guess magazines should abandon the use of "Beijing" and revert to "Peking", etc. so as to prove they are not slaves to revisionism.

'Course there is that nasty dig at the end of the Persian Journal piece:

While Iran dominates the eastern side of the waterway, the western shores are held by tiny Arab countries.