Like a spoiled child craving attention, North Korea threatens the U. S., again 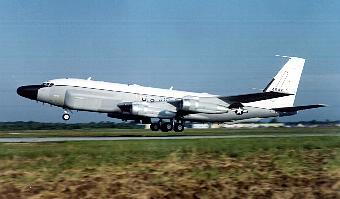 The DPRK, apprently deciding it needs more attention, threatens the US as set out here.

The Korean People's Army (KPA) Air Force Command said an RC-135 plane had flown over territorial waters on 6, 8 and 10 June .

In a statement it said the US flights were "openly crying out for a pre-emptive attack" on the country.

The command said the espionage missions were a "violent infringement of [North Korea's] sovereignty and a grave violation of international law".

It continued: "The KPA Air Force seriously warns the US imperialists that it will sternly punish the aggressors if their planes continue illegally intruding into the sky ... on espionage missions.

"They had better not forget the wretched fate of the EC-121 large spy plane in the 1960s," it added.

Background on EC-121 shootdown here. Now, if they threaten to capture a US spy ship, history will be repeating itself.

The hog-nosed RC-135 reconnaissance aircraft, with its extensive antennae array, provides vital real-time battle management information to mission planners, commanders and warfighters. The aircraft is a high-altitude version of the C-135, which is a militarized version of the Boeing 707. The Rivet Joint aircraft, owned and operated by the 55th Wing, Offutt Air Force Base, Neb., provides direct, near real-time reconnaissance information and electronic warfare support to theater commanders and combat forces. The Rivet Joint crew consists of members of several 55th Wing squadrons. (U.S. Air Force photo)