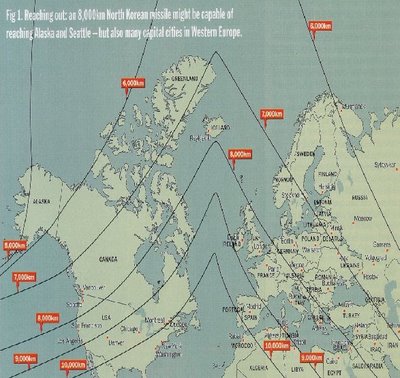 The Bush administration is weighing responses to a possible North Korean missile test that include attempting to shoot it down in flight over the Pacific, defense officials told The Associated Press on Tuesday.

Because North Korea is secretive about its missile operations, U.S. officials say they must consider the possibility that an anticipated test would turn out to be something else, such as a space launch or even an attack. Thus, the Pentagon is considering the possibility of attempting an interception, two defense officials said, even though it would be unprecedented and is not considered the likeliest scenario.

Spook 86 has some thoughts here:

Judging from Gertz's article, it appears the U.S. has been unable to clearly identify the purpose behind the TD-2 test, forcing us to prepare for both scenarios. If we can ascertain that the TD-2 is being used to launch a satellite, we will probably let the test proceed; if it is determined that the launch is an ICBM test, the probability of an intercept attempt increases dramatically. Determining North Korea's intentions has likely been complicated by Pyongyang's proficiency at denial and deception. It is certainly in Kim Jong-il's interest to keep Washington guessing, delaying any engagement decision to the last possible moment.

How would North Korea react to a U.S. attempt at engaging their missile? That's the $64,000 question. Beyond the usual propaganda barrage and diplomatic bluster, Pyongyang might employ some military options of its own, ranging from the intercept of U.S. reconnaissance aircraft near its borders, to the engagement of ROK naval forces along the Northern Limit Line (NLL), the maritime extension of the DMZ. Potential warning time for these events would be limited, given that much of North Korea's armed forces are positioned along their coastlines, or near the DMZ.

North Korea said in comments published Wednesday that its self-imposed moratorium on testing long-range missiles from 1999 no longer applies because it's not in direct dialogue with Washington, suggesting it would hold off on any launch if Washington agreed to new talks.

"Some say our missile test launch is a violation of the moratorium, but this is not the case," Han Song Ryol, deputy chief of North Korea's mission to the United Nations, told South Korea's Yonhap news agency in an interview from New York.

"North Korea as a sovereign state has the right to develop, deploy, test fire and export a missile," he said. "We are aware of the U.S. concerns about our missile test-launch. So our position is that we should resolve the issue through negotiations."

Pyongyang has consistently pressed for direct dialogue with the United States, while Washington insists it will only speak to the North at six-nation nuclear talks. The North has refused to return to those nuclear talks since November because of a U.S. crackdown on the country's alleged illicit financial activity.

On Wednesday, the U.S. ambassador to Japan, Thomas Scheiffer, called on Pyongyang to return to the six-party talks but did not address the possibility of bilateral negotiations.

"They have the opportunity to do that through the six-party talks," he said. "They don't have to undertake bad policies in order to talk to the United States."

He also said the United States has means of responding to a North Korean missile test that it didn't have the last time Pyongyang carried out a launch in 1998, and is considering "all options."