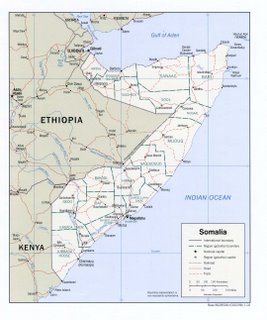 The reason for the attack is unclear. It came as the government discussed a response to an Islamist victory this week in the capital, Mogadishu.

Militia of the Islamic courts seized Mogadishu from warlords, who had controlled the city for some 15 years.

The central town of Baidoa, some 200km from Mogadishu, is the temporary base of President's Yusuf's fledgling administration, which has not moved to Mogadishu because of security concerns.

The BBC's Hassan Barise in Mogadishu says the gun battles broke out in the centre of Baidoa on Friday morning.

Among the dead included a well-known leader of the Geledleh clan, Malaq Somow Abdi Garrun, whose militia led the attack. MP Mohamed Hussein Afaraleh was among the wounded.

The war of the warlords and their clans...

Speaking of clans, here's more on the "Islamic Courts":

The Islamic courts say they want to promote Islamic law rather than clan allegiance, which has divided Somalis over the past 15 years.

However, all but one of the 11 courts is associated with just one clan - the Hawiye, who dominate the capital, but they are divided into sub-clans.

In order to avoid accusations of clan bias, each court would try members of their own sub-clan, wherever the alleged crime was committed.

Some clan elders in north Mogadishu have now set up their own court, independent of the union.

ThreatsWatch is on the case.

UPDATE: More on the confusing Islamic court situation here, along with a description of what sounds like a classic "protection racket":

Yusuf Indha-ade, who controls lower shabelle region, did not establish an Islamic court in that region mostly populated by Biamal clan who oppose his rule as occupation since 2003.

Elsewhere, authority of Yusuf Indh-ade is reported to have imposed tax collection on Bulo-Marer district of lower Shabelle. The residents are unpleasant with the move. Sources confirmed Somalinet.

Each house and shop in the district should pay $5 per month while each store or big business center pays $10. Despite this there is no public service at all in the district.