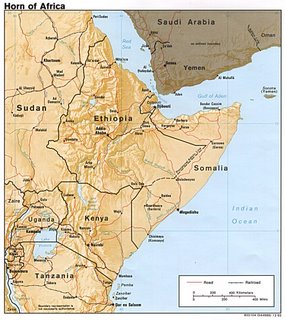 QUESTION: Yemen has been generous to Somali refugees, yet they struggle to find jobs, healthcare and education. There have also been allegations of discrimination. What is the government's response to this?

ANSWER: I think we're taking a responsible attitude toward the Somali refugees because we look at it as a humanitarian issue. We also look at it from a religious point of view - as Muslims who have to care for Muslims - and also as countries that have historical connections. There are many Somalis of Yemeni descent, and many Yemenis of Somali descent, so there's a lot of history there.

As for discrimination, this is always the case. Refugees in any part of the world will always think they're not getting their rights. I think if you ask refugees in Egypt or Europe, some of them will claim they aren't getting their rights as refugees. This may be true, but as far as Yemen is concerned, I think it's exaggerated. Actually, we know that the number of refugees registered officially is probably one-third or one-fourth of the total number of Somali refugees in the country, because the rest of them are moving completely freely and are integrated into society.

Q: But they continue to face problems accessing jobs, healthcare and education.

A: Yes, but Yemenis themselves have difficulty getting jobs, the right medical care and education. This is a general issue for the Yemeni government. I think what they feel is exactly what Yemenis feel as far as what the government provides. This is why we've called upon donors - Europeans, Japan, the United States of America - to increase their allocation for the refugee commission in Yemen, because we know that Yemen itself cannot provide all the resources necessary for them.

And couple pieces on Somali refugees here and here.

It is a tragedy with international dimensions. Yet in Bosasso port, smugglers continue to have a free hand to peddle their extraordinary wares: drugs and guns brought into Somalia, people shipped out.
***
In Bosasso’s harbour are fleets of small fishing boats. These are the smugglers stock in trade: drugs and guns in, people out. Heroin and morphine are said to be among the main “imports” from India, distributed through East Africa. Guns – small arms, Kalashnikovs and rifles – are brought in from Yemen and sold throughout the region. According to local security officials, an automatic rifle costs about $50 in Yemen, and can be sold for between $230 and $300 elsewhere.

The regional smuggling network plays an important part in moving weapons. Dealers organise distribution according to areas of conflict. “If there is fighting in Kismayo [a port in southern Somalia], the dealers organise to take the guns from the boats straight down there – and it will be like that for two or three weeks, until somewhere else comes up,” explained a security source.

Of course, these weapons play an important role in the on-going Somali war between clans, warlords and the Islamic Court crowd. Time to engage in weapons and refugee interdiction?
Posted by Mark Tempest at 6/14/2006 06:10:00 PM