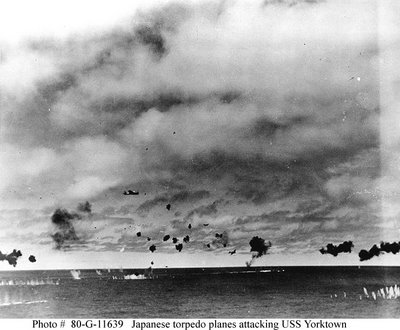 The battle of Midway is considered the decisive battle of the war in the Pacific. Seven months after its stunning victory at Pearl Harbor, the Japanese navy was confident and on the offensive, capturing vast territory throughout Asia and the Pacific. Its plan was to entrap and destroy the U.S. Pacific Fleet, plus capture Midway Island and use it as a base for a possible invasion of Hawaii. In late May 1942, U.S. naval intelligence intercepted coded messages that confirmed Japanese plans of an attack on Midway sometime in early June. Unknown to the Japanese, the United States had broken the code. The aircraft carriers Enterprise and Hornet left Pearl Harbor on May 28 to take up a position northeast of Midway. Two days later, the Yorktown steamed out of Pearl to join them. Five days later, the United States would emerge victorious, and the Japanese navy would never recover from the defeat. While the battle raged from June 4-6, the events of June 4 were the Pacific war's turning point.

Why the turning point? The Japanese could not replace their carriers nor their aircrews. Further, as recounted in Flyboys:

As a result, many Japanese army garrisons wer left dying on the vine as the US and allies leap-frogged across the Pacific. The Japanese Navy leaders also thought the ultimate battle would be between the battleship fleets of the US and Japan (despite the clear evidence that carrier air power had supplanted the battle fleets) and kept trying to set up the major surface engagement that they felt would win the war. Which, in turn, resulted in the last great surface naval battle- Leyte Gulf. But that's a tale for another time...

Hat tip to John of the Castle for the bracing morning shot across the bow.