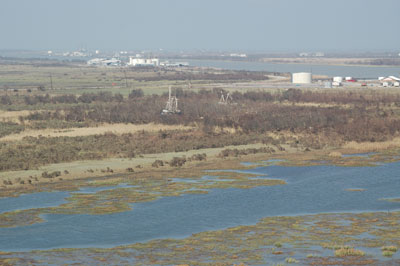 Big oil spill from Venezuela-owned Citgo refinery in Calcasieu Ship Channel , Lake Charles, Lousisna, cuts supplies to other refineries and will cost a bundle to clean up. Reported here:

The spill comes at an inopportune time for the oil industry. It comes ahead of the Fourth of July weekend, which usually is marked by gasoline demand, and has led to a cut in production at several Lake Charles refineries, pushing up oil product prices when they are already a politically sensitive issue.

Unexpected cleanup expenditures only compound the cost pressures faced by the industry, especially in the U.S. Gulf Coast, which has experienced high labor demand since the post-Hurricane Katrina recovery effort got underway.

As more sophisticated equipment has come in, along with an additional 1,000 people, the price has risen to about $2 million a day. Just one week into the effort, Guidry estimated that Citgo has already run up a $10 million bill.

At the most, another week of intensive cleanup will be needed, Guidry said. After that, the price structure for the effort will change as fewer personnel using increasingly specialized equipment work for several months or more to address the more sensitive shoreline areas. During that period, the costs may subside, but the ultimate price tag will rest on just how clean Citgo ultimately makes the area, he said.

A representative from Citgo, a unit of Venezuelan state oil company Petroleos de Venezuela, declined to comment on the cleanup effort late Tuesday.

Beyond the burden of recovering the oil, Citgo may face fines often required of companies with significant spills, an official with a leading oil industry trade group said Tuesday.
***
The spill has cut off traffic to three refineries and limited traffic at a fourth.

ConocoPhillips and Citgo have acknowledged that they cut the amount of crude oil they were processing at their refineries due to the blockage of their main supply route. ConocoPhillips' refinery runs about 250,000 barrels a day normally and Citgo's about 425,000 barrels per day. A third, Pelican Refining, is shut temporarily. Two barges were allowed into Calcasieu Refining, an 85,000-barrel per day plant.

The blockage has pushed up prices for crude and gasoline on the New York Mercantile Exchange.

More here. Photo of portion of Calcasieu Ship Channel from the collection here.