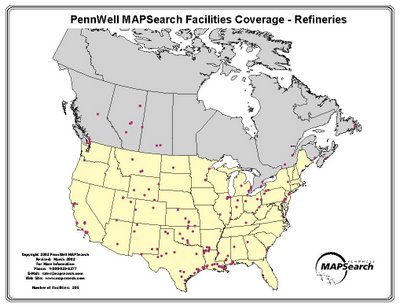 For some time, I have been posting on the problems caused by a shortage of refineries.

Now, as reported here, new refineries are being planned, but not for the US- a fact that will cause US consumers to pay higher gasoline prices.

"Right now, refining is maxed out," Rathvon said on the sidelines of a Middle East energy conference. "At this point, the shutdown of a single refinery -— even for maintenance - can trigger an increase in gasoline prices."

Refineries in fuel-thirsty Asia are operating at a frantic 95% capacity, Rathvon said. In North America and Europe, refineries are also running at over 90% capacity, he said. "Running that tight has put prices up," Rathvon told the Associated Press.

New refining capacity of at least 6.5 million barrels a day over the next decade could shave $2 or $3 from the price of a barrel of crude oil. Americans might see a 5 to 10 cent reduction in the price of a gallon of gasoline, Rathvon said.

But most new refineries are being built outside the United States -— mainly due to opposition to refinery construction by local communities near proposed sites. That means Americans may pay as much as $1 per barrel more to import a larger proportion of their fuel as finished gasoline and diesel in coming years, Rathvon said.

Around 60% of new refinery construction is in Asia and the Middle East, mainly China, India, Saudi Arabia, Vietnam, Indonesia, Kuwait and Japan.

Thank you, NIMBYs and environmentalists. You have managed to transfer the problems to other parts of the planet and added to the cost of US consumers.

On the US House debate on incentives for refinery expansion, see here.

Noted in passing is the National Petrochemical & Refiners Association comment on the Federal Trade Commission findings on post-Katrina gas pricing:

Bob Slaughter, President of NPRA, the National Petrochemical & Refiners Association, today testified before the Senate Committee on Commerce, Science, and Transportation'’s hearing on "“Price Gouging & Gasoline."” Mr. Slaughter said, "“Yesterday'’s Federal Trade Commission (FTC) report found that there is no evidence that refiners illegally manipulated gasoline prices or constrained gasoline output last year. These statements parallel the findings of more than two dozen state and federal investigations of the oil industry in the last six years. As Yogi Berra once famously said: "‘It'’s deja  vu all over again."The FTC also found that the '‘pace of [refining] capacity growth resulted from competitive market forces.'’ Finally, the Commission repeated its earlier warning that federal price gouging legislation '‘could cause more problems for the consumer than it solves."”

Slaughter added, "“The tight gasoline markets of the past several years have led to dozens of investigations of the refining industry at federal and state levels. Like hearty perennials they come up time and time again. In each case, the industry has been cleared of wrongdoing. The simple fact is that allegations of refiner price-fixing, price gouging and other illegal pricing practices are patently false. This most recent FTC probe was thorough and extensive in scope, as detailed in the Commission'’s interim report to the Congress last March. NPRA hopes that Congress and the public take full notice of its findings. If so, they will conclude that market forces and the activities of the diverse and competitive U.S. refining industry have served the nation well under both normal and difficult economic conditions."

NPRA'’s testimony noted that domestic demand for refined products has increased significantly in recent years, outstripping the nation'’s ability to meet product needs with domestic supplies. When even greater increases in foreign demand for gasoline, diesel and other refined products are factored in, it becomes obvious that tight supplies and market volatility could continue for a period. This situation will ultimately be addressed through announced additions to U.S. refinery capacity, estimated at 1.4 to 2.0 mmb/d. This is an 8-11%increase in U.S. capacity, which should be in place by 2010 at the latest. NPRA reminded the Committee that, over the past 10 years, domestic refining has increased by an average of 177,000 barrels per day of production each year or the equivalent of building one new, larger than average refinery each year. This fact should assuage some concerns about the fact that no new grassroots refinery has been built in the U.S. in over 30 years.

Also of note are the FTC comments on the effect of geography and lack of refining capacity on gas prices found here. For example:

Geography is partly responsible for the difference in gasoline prices from one region of the country to another. Prices are higher in areas that are farther from the refineries that turn crude oil into gasoline. Considering that refineries usually are built near sources of crude oil, you usually can count on prices on the Gulf Coast being lower than in other regions. By contrast, you can count on seeing higher prices in the Northeast and Midwest because neither region has enough refineries to make all of the gasoline that their residents use. Those states must import much of their gasoline from the Gulf Coast by pipeline, which adds to the cost at the retail pump. The Rocky Mountain region is largely self-sufficient in gasoline, with limited pipeline connections to neighboring regions, so prices in the Rockies may vary from the rest of the country. And the West Coast often has higher prices for several reasons, including its lack of pipeline connections to the major refining center on the Gulf Coast and the fact that the demand for gasoline in California -– the most important consuming area in the West -– has outstripped the ability of local refineries to supply it. During times of high demand in California, or when problems crop up at local refineries, gasoline must be shipped -– at great cost -– through the Panama Canal or from elsewhere in the world.

The level of taxes that each state imposes on gasoline sales also is a reason why gasoline prices vary among states and regions of the country. Consumers pay a uniform federal gasoline tax of 18.4¢ per gallon, but each state levies its own gasoline sales tax as well. Some states collect little from this tax, while others raise substantial revenue from gasoline. Current state gasoline taxes range from 8¢ per gallon in Alaska to 44.5¢ per gallon in New York, excluding any temporary tax relief state or local governments may have enacted recently. Several states charge an additional percentage sales tax, which rises as gasoline prices increase. And a number of cities, counties, and municipalities impose their own gasoline taxes. So depending on where you live and where you'’re traveling, you might see a difference of 14% in gasoline prices from taxes alone.

and this headline: "HOW REFINING CAPACITY AFFECTS GASOLINE PRICES: A CLASSIC STORY OF SUPPLY AND DEMAND."

Hmm. "Supply and Demand" - Must be one of those weird economic theories exploited by "Big Oil"! UPDATE: Speaking of "supply and demand", Houston's Clear Thinkers has a nice post on the decline and fall of natural gas prices here.

Related to National Defense? If you enjoy having the crude oil business dominated by OPEC, just wait for the challenges imposed by being dependent on other countries for refined product.

And the Panama Canal, too?

Isolationism is great if you can be independent. However, in the real world...

UPDATE2: And, I wonder, for the benefit of the environment, whether the issues raised in the US are being addressed in Yemen, Saudi Arabia and other places? In other words, has the US level of regulation reached the point where it is actually counterproductive in that it is pushing development to areas of the world without the same stringent standards as the US and thus creating a net gain in pollution world-wide? Woudl slightly less demanding standards keep pollution lower?

My guess is "yes", unless Yemen requires the same Environmental Impact Statements and controls as the US, of course...