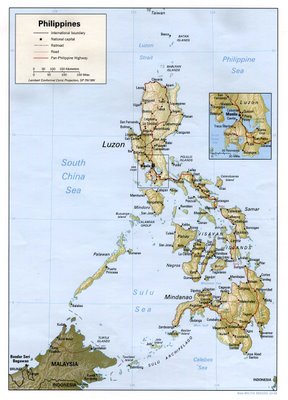 The US Pacific commander on Monday flew to a southern Philippine island plagued by al-Qaeda-linked militants to visit American troops who are battling terrorism by treating the sick and helping build roads and schools.

The predominantly Muslim island of Jolo, about 940 kilometers (580 miles) south of Manila, is a crucial front in the war against Islamic militancy in Southeast Asia. It has served as a stronghold of the small but violent Abu Sayyaf group, which is on a US list of terrorist groups, and has suffered under a pestering image of lawlessness and violence.

Ahead of US Admiral William Fallon's visit, the Philippine military said early Monday it has received information from multiple sources that Abu Sayyaf militants were planning to attack government security forces and US troops within the next 24 to 48 hours.
***
The Abu Sayyaf, which has been linked to Osama bin Laden's terror network, is notorious for deadly bombings, beheadings and kidnappings. Although Philippine military offensives have whittled down guerrillas to a few hundred in recent years and kept them mostly on the run, the ragtag group has been blamed for recent bomb attacks and killings of several Philippine marines on Jolo.

Security officials believe the Abu Sayyaf's elusive leader, Khaddafy Janjalani, may be hiding on the jungle-clad island possibly with a few Indonesian allies from Jemaah Islamiyah, an Indonesian-based group blamed for terror attacks and plots across the region.

The guerrillas have plotted against but have failed to harm heavily protected American troops on Jolo, a police intelligence official said on condition of anonymity because he wasn't not authorized to talk to reporters.