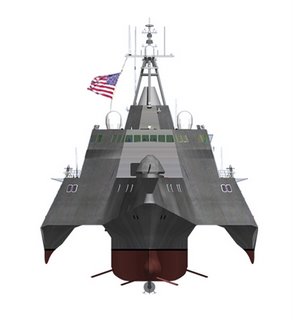 The first of a new breed of Navy ship — faster and easier to maneuver — is expected to launch later this year to meet threats including modern-day pirates and terrorists who turn speedboats into suicide weapons.

The Littoral Combat Ship is powered by steerable waterjets, so it doesn't need propellers or rudders. It's designed to go more than 50 mph; traditional destroyers have had the same top speed — about 35 mph — since World War II.

The LCS has a shallow draft and its waterjets let the ship zoom close to shore without getting stuck and to turn on a dime, allowing it to chase smaller boats. The name itself is taken from the coastal "littoral" waters in which the ship will operate.

The LCS will be more lightly armored than bigger ships, but its speed will give it a tactical advantage in combat, said Rear Adm. Charles Hamilton, program executive officer for ships, who's overseeing the project from Washington.

The Navy envisions several of the ships working together on missions using unmanned vehicles, helicopters and other weapons, he said. An LCS will have a core crew of only 40 sailors, and berthing for up to 75, compared to 330 sailors aboard a destroyer.

Smaller. Faster. Lighter. And if the Navy can't use them, maybe the Coast Guard can. Sorta like those hydrofoil things in the 70's... 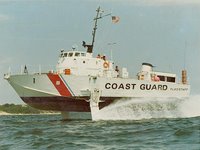 Top images are of General Dynamics/Bath Iron Works version of an LCS.