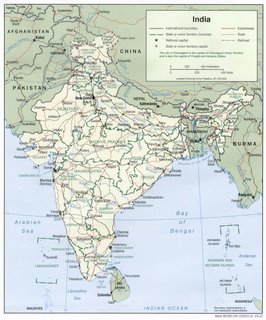 Despite these developments, China remains the most destabilising factor for Indian national security. It has consistently sought to undermine India's influence in Asia and across the world. The most dangerous manifestation of this role has been its continuing nuclear and missile cooperation with Pakistan. After having provided Pakistan with nuclear weapons designs, enrichment technology, un-safeguarded Plutonium facilities for developing thermonuclear weapons capabilities and nuclear capable missiles, China has recently transferred Cruise Missile technology enabling Pakistan to test Cruise missiles that can endanger our land and maritime security.

China took the unprecedented step of joining Pakistan in providing military supplies to the beleaguered and unpopular King Gyanendra in Nepal, at a time when India and the international community were trying to promote political reconciliation and democracy in the mountain kingdom.

During the past year, China has effectively lobbied against our efforts to seek Permanent Membership of the UN Security Council. There is now growing evidence that both in Washington and in the capitals of the 45 member Nuclear Suppliers Group, China is, behind the scenes, seeking to undermine the Indo-US nuclear deal that is designed to end global nuclear sanctions against India. In maritime terms, there are disturbing signs to indicate that China is seeking naval and monitoring facilities across the Indian Ocean from Myanmar to Pakistan, in a bid to challenge India's maritime security interests. Moreover, a Chinese naval presence in Gwadar port in Pakistan, can seriously challenge the security of oil supplies from the Persian Gulf to India.

Unlike India, China takes a long-term view of its national interests. It does not allow its policies to be influenced by sentimentalism. In the last few years China has seen India slowly, but steadily, emerging as a growing economic power that has been able to expand its influence in South and South East Asia. The 1998 nuclear tests and the failure of international sanctions against India, established that India has the potential to become a nuclear power independent.

China plays hardball on its own time schedule. India has learned, though, as shown in this concluding sentence: "There is no place for sentimentality or illusions in dealing with our powerful northern neighbour."