How the "Murtha plan" would work 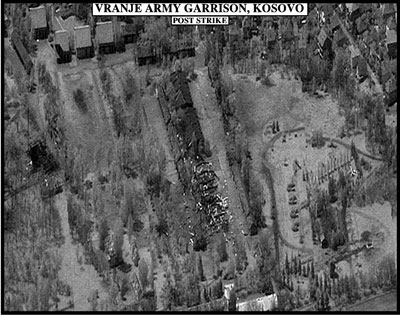 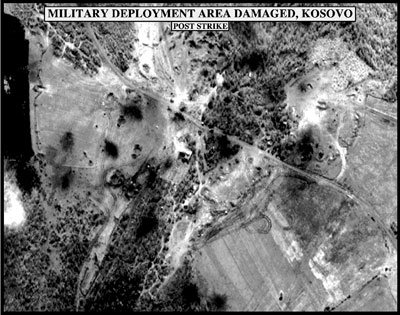 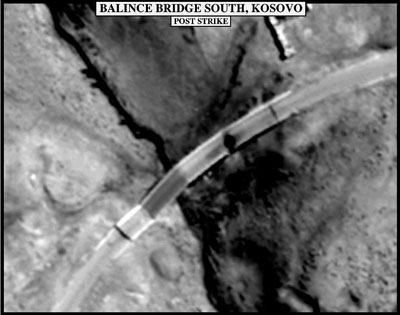 As the blogoworld is now well aware, Rep.and Col (USMCR(ret)) John Murtha has suggested that we don't need boots on the ground in Iraq and could be using a bombing 911 service to dispatch the bad guys. Actually, his exact words are found in Froggy's post at Black Five here, wherein Rep Murtha suggests that using Okinawa as a base of operations just might work.

I assume that Rep. Murtha is suggesting bombing in lieu of ground forces. He might have missed a briefing or two on military capabilities since his retirement from the Marine Corps Reserve in 1989 (entered Marines in 1952, served 37 years= 1989). In fact, he missed out on the lessons of Desert Shield, Desert Storm, Somalia, Rwanda, the Balkans and, last, but not least, Kosovo. Unless, of course, as a Congressman he gets up to the minute reports of an operational nature.

In any event, his suggestion of using precision bombing from, I presume, high and safe altitudes (so as not to place any of our personnel in undue harm's way) reminded me of some things.

The first of which was some lessons we might have learned from following up on the Kosovo bombing missions, as detailed in a MEAT report somehow gathered and reported on by Newsweek under the title Newsweek Exclusive: Suppressed Air Force Report on Kosovo Bombing Shows Little Damage Done to Milosevic's Forces, Contrary to Early NATO and Pentagon Claims. Some highlights:

A suppressed U.S. Air Force report
obtained by Newsweek shows that the number of targets verifiably destroyed by
high-altitude bombing in the Kosovo War was a tiny fraction of what top
military officers publicly claimed. The report shows there were 14 tanks
destroyed, not 120; 18 armored personnel carriers, not 220; and 20 artillery
pieces, not 450. And instead of the 744 "confirmed" strikes by NATO pilots
during the war, the Air Force investigators, who spent weeks combing Kosovo,
found evidence of just 58 strikes. The damage report has been buried by top
military officers and Pentagon officials, who, in interviews with Newsweek
over the last three weeks, were still glossing over or denying its
significance.
***
Gen. Wesley Clark, the top NATO commander during the war, tried - at least
at first - to gain an accurate picture of the bombing, Newsweek reports in the
current issue. At the end of June, Clark dispatched a team to do an
on-the-ground survey in Kosovo. The 30 experts were known as the Munitions
Effectiveness Assessment Team, or MEAT.
The bombing, they discovered, was highly accurate against fixed targets,
like bunkers and bridges. "But we were spoofed a lot," said one team member.
The Serbs protected one bridge from the high-flying NATO bombers by
constructing, 300 yards upstream, a fake bridge made of polyethylene sheeting
stretched over the river. NATO "destroyed" the phony bridge many times.
In addition, artillery pieces were faked out of long black logs stuck on
old truck wheels. A two-thirds scale SA-9 antiaircraft missile launcher was
fabricated from the metal-lined paper used to make European milk cartons. "It
would have looked perfect from three miles up," said a MEAT analyst. The team
found dozens of burnt-out cars, buses and trucks - but very few tanks, and no
indications that hit tanks had been hauled away.
When Clark heard this news, he ordered the inspectors to walk the terrain,
report National Security Correspondent John Barry and Assistant Managing
Editor Evan Thomas in the May 15 issue (on newsstands Monday, May 8). They
came back with 2,600 photographs and briefed the commanders. "What do you mean
we didn't hit tanks?" said Gen. Walter Begert, the Air Force deputy commander
in Europe. Clark said, "This can't be. I don't believe it.
The Air Force was ordered to prepare a new report and in a month, Brig.
Gen. John Corley was able to turn around a survey that pleased Clark. It
asserted that NATO had successfully struck 93 tanks, close to the 120 claimed
by Gen. Shelton at the end of the war, and 153 armored personnel carriers, not
far off the 220 touted by Shelton. But Corley's team did not do any actual
field research. Rather, it looked for any support for pilots' claims. "The
methodology is rock solid," said Corley, who strongly denied any attempt to
obfuscate. "Smoke and mirrors," is more like it, according to a senior officer
at NATO headquarters who examined the data, Newsweek reports. NATO sources
also say two of Clark's officers cautioned him not to accept Corley's numbers.
The U.S. intelligence community, too, was doubtful. "Nobody is very keen to
talk about this topic," a CIA official told Newsweek. Over-rating the Kosovo
bombing could lead to fundamentally flawed strategies in future similar
conflicts, Newsweek notes.(emphasis mine)

I'm sure there is more on this topic other places, but it should give anyone thinking that bombing from afar is the solution some pause.

While pondering the implications over "over-rating the Kosovo bombing" you might also consider these words from T.R. Fehrenbach:

You may fly over a land forever; you may bomb it, atomize it, pulverize it and wipe it clean of life--but if you desire to defend it, protect it, and keep it for civilization, you must do this on the ground, the way the Roman legions did, by putting your young men into the mud.

Just saying, commanders and Congressmen need to have the truth about past actions, not reports that support some previously taken position.
UPDATE: Another view of the "misunderstood" modern airpower here (Hat tip: NOSI). Maybe it is misunderstood, but it still seems to require some people on the ground to avoid the sort of deception used by the Serbs and to wrap up all those loose end things - like getting things to work in the area you just bombed.
Posted by Mark Tempest at 6/19/2006 11:06:00 AM