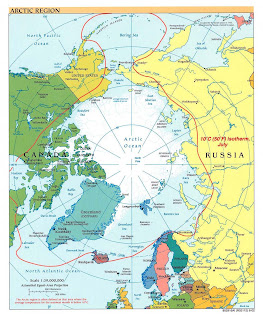 "Way up north by the ice bound ocean" sang Tim Rush about a county, I guess, in New Hampshire. But way up above that, national interests put troops in the field, working their way across rugged and very cold ice fields to maintain sovereignty claims over parts of the "high Arctic." The Canadian effort is set out here:

Battling high winds, 25-foot ice walls, mechanical breakdowns and whiteout conditions, a Canadian military team, including Eskimo reservists, last week completed a 17-day trek designed to sustain Canada's claim to sovereignty over the high Arctic.
***
Canada has always fiercely guarded its sovereignty over its Arctic archipelago the triangle of more than 36,500 islands that reaches from its Arctic coast almost to the North Pole. 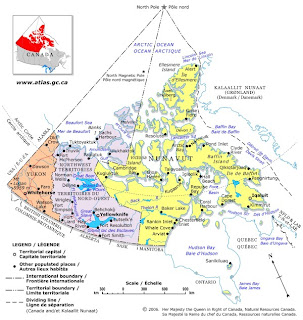 Some of the islands are no larger than a man could stand on, while others, like Baffin Island, are nearly the size of France.
But as higher global temperatures peel back the ice casing from the land and ice-choked waterways give way to lapping waves, what was once seen as a wasteland now offers a potential mineral bonanza including gold, diamonds, oil, emeralds and a long-sought northern sea route from the Atlantic to the Pacific.

Canada is not alone in such patrols- as Hans Tino Hansen of Protocol emailed in follow up to this- the Danes have long had a sovereignty patrol for northern Greenland- The Sirius Sledge Patrol:

What is the SIRIUS sledge patrol?

It is a defence unit that was created in 1950 under administration of the Danish Defence Command. In 1994 it was placed under control of the Admiral Danish Fleet. SIRIUS is comprised of 14 soldiers. Twelve are stationed in the patrol at Daneborg and 2 are located at the Defence guard in Mestersvig.

a) To maintain Danish sovereignty in North and North East Greenland.
b) Police authority the Northeast Greenland National Park, which is the worlds largest.
c) Conduct military surveillance over 160,000 square kilometres by dog sledge.

Where is SIRIUS located? 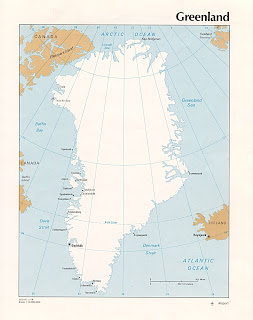 The main SIRIUS station is at Daneborg (74 degrees N) in North East Greenland. Until 1974 there was a Danish civilian weather station at the same location. For four months in the spring and for two months in the fall, 6 sledge teams, consisting of 2 men, 11 dogs and 1 sledge each, patrol North and North East Greenland. In summer, about 65 depots are laid out by the patrol itself for the coming winters’ sled journeys. Depot lying is carried out by cutters, planes and helicopters.

More here and here (in Danish). A look at one of the men who was on the Sirius team here.

A brief history of military operations in Greenland here:

In 1940, most Americans who knew that Greenland existed thought of it as a nondescript white blob near the tops of their world maps. That the place might have any military significance to the great powers had occurred to scarcely anyone - least of all to the people who lived there. But in the next five years Greenland was to become a small but significant theater of war, and was to confront the U.S. Coast Guard with some of the most arduous duties it had ever been called upon to perform.

Greenland is a largely deserted island of about 827,000 square miles, most of which lies above the Arctic Circle. Scientists believe that the interior is covered by mountains and steep gorges, but since prehistoric times they have been buried under a mass of ice that covers 80 percent of the land area. (If the Greenland ice cap ever melted, the world's oceans would rise by about 20 feet.) In the winter, the arctic winds blow unimpeded for hundreds of miles over the ice cap, covering it with snow and driving the temperature as low as 90 degrees below zero.

Sirius sledge team photo from here (also some remarkable photos of the "largest National Park in the world): 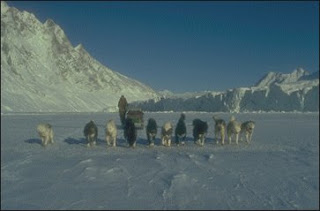 The Sirius Sledge patrol uses the Greenlander dog. At the age of only half a year the puppies will join their sledgeteam, normally consisting of 11 dogs. A full-grown dog weighs 40 - 50 kg and pulls its own weight for an average of 30 - 40 km (up to 100 km) each day.

Some more facts about Sirius:

The sled patrol is under command of the Admiral Danish Fleet stationed in Århus. From here the patrol is managed by the Patrol Branch North and North East Greenland (PNG), which is stationed at Naval station Auderød (Also basic training station for sailors). People in active service in PNG are all former members of SIRIUS. The main field headquarters of SIRIUS is at Daneborg (74 degrees N). There is an additional support station at ELLA Ø in Kong Oscars Fjord. (72 degrees N). This station is only active in summer, when 4-6 SIRIUS members live there and are busy laying out depots by boat.

During summer, various levels of SIRIUS members are present. These include personnel that are about to return to Denmark after 2 years service, ones that have a year to remain and then recently arrived men who are starting their 2 years of service. In addition, 3 or more people from PNG are present, helping with many logistical activities during the short summer period.

In addition to the 12 men stationed at Daneborg, PNG has 2 former members of the patrol stationed at the former mining airport at Mestersvig (260 km south of Daneborg). These 2 men are part of the SIRIUS surveillance and radio service and also maintaining the airport runway and 10 large buildings.

During the summer about 30 research and pleasure expeditions visit the National Park. Each must obtain special permits from the Greenland Government and SIRIUS controls them.

SIRIUS patrols the world’s biggest National Park with an operation area of 160.000 km2 (about three times the size of Denmark).

During the 54 years that SIRIUS has been operational, more than 750.000 km have been patrolled on dog sled. In the same period, cutters in association with depot lying have traversed more than 100.000 nautical miles.

SIRIUS is scheduled for one supply ship visit per year. However, two years of supplies are always maintained on hand because of the chance that the ship will not be able to navigate through coastal ice in a season.

About 150 hours of flying are used for depot lying each year.

About 30 tons of supplies are yearly transported out to the 65 sled depots.

SIRIUS maintains about 65 of the 350 cabins, which are located in the National Park.

SIRIUS has build 34 of the cabins being used for depots and workshops at Daneborg where the average yearly temperature is – 10 degrees. VENSLEV HYTTER designed the cabins specifically for use in North East Greenland. The cabins are prefabricated in sections, and SIRIUS men can build one in about 50 work hours.

About 260 officers have served duty at SIRIUS. Calorie consumption for men is about 7000 per day and about 5000 per day for dogs. The average time of service for a SIRIUS dog is 5 years. Only the ones NOT run-out are allowed to live on after their 5th year, and in that case they are distributed between Station North, Danmarkshavn and Mestersvig. SIRIUS breeds their own dogs. The optimal dog is shorthaired with erect ears, “square”, long legged, with a weight between 40 and 50 kg. By the time a dog is retired it will likely have travelled more than 20,000 km in a sled team.

Tough work, tough people. And it's more than lines on maps.