When the United States abandoned our ally South Vietnam (something about Congress cutting off funding - maybe even in a "bipartisan" manner):

Congress passed the Case-Church Amendment on 19 June, 1973. This Act specifically forbade any further U.S. military activity in Southeast Asia, beginning August 15, 1973. It passed by a vote of 278-124 in the House of Representatives and 64-26 in the Senate. That vote would have been adequate to override a Presidential veto.

The party makeup of the 93rd Congress was composed of the following at the time of the Case-Church Amendment:

Now, it shouldn’t take a mathematics major to do the math on this. Clearly, a significant number of republican members voted in favor of the legislation. So many, in fact, that the Bill was veto-proof. And Nixon certainly would have vetoed the Bill if he had an inkling of a hope that he could have sustained it.

In any event, the "reunification" of Vietnam was ugly - and deadly:

In Vietnam, the new communist government sent many people who supported the old government in the South to "reeducation camps", and others to "new economic zones." An estimated 1 million people were imprisoned without formal charges or 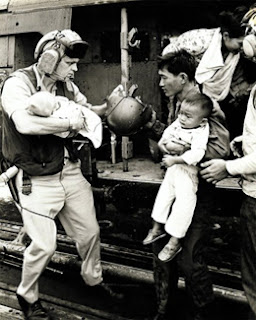 trials.[1] 165,000 people died in the Socialist Republic of Vietnam's re-education camps, according to published academic studies in the United States and Europe.[1] Thousands were abused or tortured: their hands and legs shackled in painful positions for months, their skin slashed by bamboo canes studded with thorns, their veins injected with poisonous chemicals, their spirits broken with stories about relatives being killed.[

Few of us who were around at the time will forget images of the desperation of the South Vietnamese trying to escape what they knew was coming. See also here.

Steve Schippert at ThreatsWatch Rapid Recon posts about concerns for what may happen should the U.S. "declare victory" and abandon the Iraqis to their fate in 'Plan B' Anyone?:

A withdrawal of US ground forces to the periphery cedes entire provinces as al-Qaeda havens. Air power can disrupt but not break a motivated terrorist organization internally. And what would almost certainly happen as a result is an eventual return of many al-Qaeda terrorists to AQ points of interest, particularly back into Saudi Arabia. They will not be returning for retirement benefits.

Consider also that, at the end of the day, Musharraf’s grip on power in Pakistan exists largely due to the fact that the Taliban-al-Qaeda alliance in the tribal areas has not made a concerted push eastward upon Islamabad yet. But, with the needed chaos reigning unfettered in Iraq and their fighters returning to the Arabian Peninsula, the time will be right for the push with the dominoes lined up for the fall. 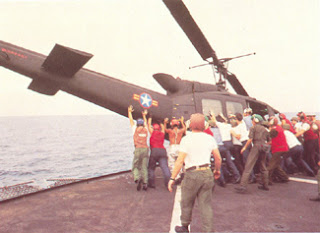 Recall that Hamid Gul has openly called for an Iranian-Pakistani military alliance and a Pakistani “Islamist nuclear power that would form a greater Islamic state with a fundamentalist Saudi Arabia after the monarchy falls.”

More on this in greater detail in the coming days. But for now, it is sad commentary that there is practically no political will or support from Washington behind the mission tasked General Petraeus in Iraq. He has effectively been handed the keys while our elected leaders work diligently to wash their hands of any ownership of the situation in Iraq.

They must recognize that they cannot wash their hands of the consequences of failure borne of non-support. We will all own a stake in the aftermath, which could well mean the black banners of jihad from al-Qaeda and Iran gracing nearly all of the western and eastern shores of the Persian Gulf.

Steve links to a Cliff May piece here and to a therein linked piece here (pdf) from the Brooking Institute about which Steve writes:

Byman and Pollack call for a plan to effectively cordon off Iraq as best as possible, serving also to guard refugee camps heavily populated by Iraqis fleeing the internal bloodletting

Which paragraph is the lead in to the longer quote above.

But all of which points out that the defeatists are fishing in very troubled waters. They are proving Osama bin Laden right - the U.S. can be sent packing by a small number of thugs who are willing to use extreme measures to kill opponents (and even their allies, as they see the need). Having previously shown our lack of endurance in Korea, Vietnam, Beirut, the First Gulf War, Somalia, etc, the trend will simply continue.

As our own troop losses slow, we are unwilling to find and punish those who are inflicting harm on what, under at least some version of the Law of War, should be our duty to the Iraqi people:

SECTION III. -- ON MILITARY AUTHORITY OVER HOSTILE TERRITORY
Article 42
Territory is considered occupied when it is actually placed under the authority of the hostile army.

The occupation applies only to the territory where such authority is established, and in a position to assert itself.

Article 43
The authority of the legitimate power having actually passed into the hands of the occupant, the latter shall take all steps in his power to re-establish and insure, as far as possible, public order and safety, while respecting, unless absolutely prevented, the laws in force in the country.

The Law of Unintended Consequences will surely come into play if we abandon the world to al Qaeda thugs, just as it did when we abandoned South Vietnam to North Vietnamese thugs. Only this time, it has the potential to be much, much worse.
Posted by Mark Tempest at 4/20/2007 12:16:00 PM