How to help others, one step at a time 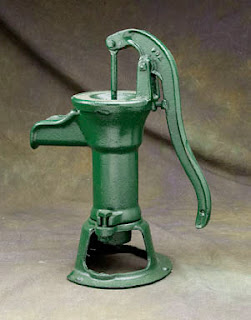 Assisting the local population in one area sometimes means taking on a lot of different missions, as is set out in this report on the first Army National Guard Well Drilling Unit:

We are fixing a well that was put in the district two years ago,” said Brown. “It was put in by the 747th Army Reserve Well Drilling unit out of Montana as a hand-pump well.”

Brown said not long after the 747th put in the well, they had to go back to the well site and change it to a solar-powered well.

“We heard through the villagers that the well was broken and they could not get water from it, so we went out to the site.”

Due to climate and the area, Brown said the well stopped working and people passing through the site tried to fix it themselves and ended up damaging it beyond use.
Because the well was broken, people were drawing water from a local oasis. An oasis is a stream of water that comes up from the ground. The people dig through the ground surface and the water seeps up through the dirt. The oasis is the only source of water for travelers and their animals with the well being damaged.

He went on to explain the process involved to fix the well. The team surveyed the site in order to determine what type of equipment they would need, how many people the project required and to test the water in the area.

“When we tested the water at the oasis, there were multiple types of E. coli and the location is where a recent outbreak of cholera was traced back to,” said Brown. “It becomes about saving peoples lives more than doing a job.”

According to Sgt. Maj. William Lee, the Mud Hog’s project manager, the oasis runs through an ancient camel trail that spans from one side of Ethiopia to another, with Djibouti being in the middle.

“The problem with the oasis is that it is open to the environment, there is nothing to protect the water from bacteria,” said Brown. “The animals use the bathroom in the water and their feces sit there and create all sorts of bacteria. Travelers bathe and drink from the water because they have no other choice. They then continue on their journey, spreading disease that they contract from the oasis.” Lee said because of this reason, fixing this particular well in the area was a top priority in order to protect the people and keep from spreading disease.
***
With the well complete and the water clean, people will go to the well for water instead of the oasis. The team also created a trough that runs down away from the pump on the well so that any excess water will run down and fill a trough for animals to drink out of. Although Brown and his team of well drillers successfully bettered the lives of thousands of villagers, the work does not stop here.

“We are always out and about throughout the area and we plan on checking up on the wells one way or another,” said Brown.

BZ, Mud Hogs! (though I wonder if the locals will appreciate that name...)

From the lyrics of Cool Water"