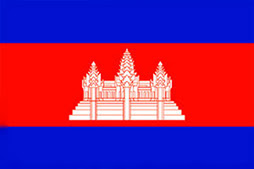 Very nice piece at Asia Times Online concerning nations that offer a "flag of convenience" service- in this case Cambodia is the main focus:

Many small countries in the world have resorted to unorthodox methods of obtaining much-needed currency. Although these methods may be legal, they often assist unscrupulous individuals and governments in conducting illegal activities. One popular method of obtaining cash is through flags of convenience (FOC). Countries, even land-locked ones, register other nations' ships under their flag for a price.
***
One of the most notorious FOC countries was Cambodia. In 1994, Cambodia established its own ship registry - Cambodian Shipping Corporation (CSC), based in Singapore - and began immediately flagging ships of other nations.
***
As more and more foreign ships registered with CSC, it soon became apparent that a large number of the ships were involved in illegal activities. Cigarette smuggling operations were discovered near Crete and Albania; during the oil embargo of Iraq, oil was smuggled out of that country; human trafficking and prostitution operations were discovered near Japan and Crete, and, of course, drug trafficking.

And then it gets worse- the North Koreans come into play:

Perhaps the best-known of these Cambodian-registered North Korean ships was the Song Sang. In November 2002, a freighter believed to be carrying weapons departed a North Korean port and was tracked by American satellites and American naval ships. In December, as it made its way through the Indian Ocean, it was stopped by American and Spanish naval forces and inspected.

The United States justified its actions by claiming that it was flying no flag and thus was considered a pirate ship. According to Richard Boucher, the State Department's spokesman, "At first we couldn't verify the nationality of the ship because the ship's name and the indications on the hull and the funnel were obscured. It was flying no flag."

On investigation it was found that the ship was the So San, which claimed to have Cambodian registry. The So San's manifest stated it was transporting cement to Yemen, but an examination revealed 15 Scud missiles with 15 conventional warheads, 23 tanks of nitric acid rocket propellant and 85 drums of unidentified chemicals all hidden beneath the bags of cement.

It is believed that the North Koreans tried to disguise the ship (Song Sang) by painting over the last two letters in the first name and the final letter in the second name (So San) to help prevent identification. The ship was eventually allowed to continue on its course after it was determined that it had broken no laws.