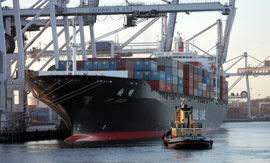 The Georgia Ports Authority today unveiled a US$1.2 billion capital improvement plan that will triple container capacity and enable Savannah and Brunswick to stay ahead of soaring Asia trade.

The capital raised for the improvement plan will be derived from internal financing, the state of Georgia and the federal government. More than $400 million will go towards deepening Savannah port and $82.6 million has been allocated this financial year for post-panamax cranes, gantrys, IT upgrades and terminal improvements.

In the five years between 2002 and 2006, Savannah's throughput has grown by 78 percent, and with an average annual growth of 16 percent, it is the fastest growing port in the US. Last year, the GPA handled 2.1 million TEUs of which 53 percent consisted of direct imports or exports from China (including Hong Kong).

Green said Savannah's throughput rose sharply in 2003 with the labor unrest on the West Coast and the port had managed to retain those customers and attract others.

"Shippers and the lines have realised that the East Coast is a viable alternative to the West Coast and that our distribution centres on the landside allow us to move cargo to 14 states that comprise almost 40 percent of the US population," Green said.

This seems to put Georgia and North Carolina in competition for adding port capacity - a report on NC's effort here. Thouhg the NC effort seems to have hit a delay:

A major delay for the proposed international port in Southport.
The project could be on hold for another year.

According to published reports, the Federal Government did not allocate money for a crucial feasibility study. And they won't be able to work it into the budget until next year.

That means the project will be put on hold until then. Reports say the study will cost around $200,000, which will be allocated into the 2008 budget.

Overall, officials say the port will cost around one billion dollars and will take about ten years to build. That means, at the earliest, the port will not be finished until 2018.

The port will be located on a 600-acre tract of land about fourteen miles from the ocean.
Ports CEO Tom Eagar says once it's built, the port will bring thousands of jobs and millions of dollars to the State and make it a major player in the shipping industry.

Despite the latest delay, officials are saying it is not a major setback. It is simply a bump in the road for a large-scale project like this.

In addition, some NC governmental agencies seem to be at odds as set out here:

- A behind-the-scenes tussle between the N.C. State Ports Authority and the N.C. Department of Transportation over roads to serve a proposed new port near Southport took center stage Wednesday morning when a Ports Authority vice president said DOT officials won't talk to his agency about the needs.

The lack of planning could threaten the port's development, as getting goods in and out of the facility will be a major factor in its success or lack of it, said Bill Bennett, vice president of planning and development for the N.C. Ports Authority, during a quarterly breakfast meeting of the Brunswick County Chamber of Commerce.

But the real problem, state Sen. R.C. Soles said later from Raleigh, is that the DOT and Ports Authority are each trying to shift road planning responsibilities to the other, a situation he wants to correct.

Soles had previously introduced a bill that would have forced a sharing of the costs between the agencies:

State Sen. R.C. Soles, D-Columbus, has introduced a bill requesting a study to determine the feasibility and cost of building a new highway to serve the proposed N.C. International Port at Southport.

The bill should be good news to residents of Brunswick County concerned about what port truck traffic would do to the area's roads. It stems directly from a letter sent to Soles in February by the leaders - mayors or vice mayors - of six of Brunswick County's coastal communities.

According to the bill proposed in the state Senate, the study should determine the most cost-effective way to relieve the traffic congestion on N.C. 211, N.C. 133 and N.C. 87, as well as the feasibility of constructing a new primary highway to the new port from N.C. 87 north of Boiling Spring Lakes or U.S. 17.

Mayor Larry Lammert of Bald Head Island, one of those who signed the letter, said Monday a new road dedicated to the port is needed to handle the volume of trucks and other work vehicles that the port would bring.

"We cannot get a port in here without getting a road in here," he said. "Right now our roads are clogged."

He said he hopes the bill will be a starting point in addressing other infrastructure needs in the county.

The N.C. Department of Transportation and the N.C. State Ports Authority would share the cost of the study evenly, according to Soles' proposal.