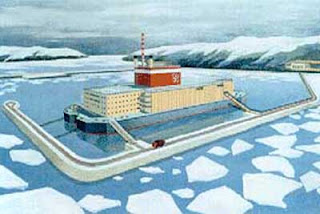 And the concept of the FNPP is very promising. Small FNPPs would be a blessing for the Russian regions adjoining the Arctic Ocean. These areas lack centralized energy supplies, and an FNPP would be an independent source of energy. It is specifically this feature of the Russian technological innovation that is attracting attention abroad: Indonesia, Malaysia, and China have all shown interest in the project. The plant off the coast of Severodvinsk will therefore also act as a prototype that can be seen by potential foreign customers.

The plant will save up to 200,000 metric tons of coal and 100,000 tons of fuel oil a year. It will be fully supported by the infrastructure of the Russian nuclear industry, and will be serviced by rotating teams. The reactors will be loaded with nuclear fuel once every three years and will have a lifespan of 40 years. Every 12 years the plant will be sent home and overhauled.

And, something else to add to the maritime security list.

A few years ago a couple of energy companies in Houston were working on power plants on barges to be towed to energy needful places. I see here that Pacific Gas & Electric seems to be stuck with one of them:

Under fire from environmentalists and skeptical of winning regulatory approval, PG&E Corp. scuttled plans yesterday to moor a floating power plant in San Francisco Bay as protection against future brownouts.

The decision came after company officials concluded that they would not be able to secure needed government permits in time to run the 95-megawatt plant this summer, when demand for electricity is at its highest point of the year.
***
Pruett insisted that the decision had nothing to do with protests from environmentalists, who were enraged at the prospect of stationing the plant's four jet fuel-powered engines on the bay. Some had threatened to board and disrupt the floating power plant should it sail through the Golden Gate.

And a place where you can get a conventional floating power plant built here:

Aker Yards Marine has been designing floating power plants (FPP’s) since 1989 with a total of six medium- speed diesel powered FPP’s having been built to date by a variety of shipyards for a variety of Owners. The plants which have been built range in capacity from 40MW to the latest at 124MW.
***
Why a Floating Power Plant?

In response to this often asked question, there are a number of situations where a floating power plant can be the optimum solution. Some of these are:

For sites in developing nations, the floating power plant can be constructed more cost effectively and rapidly on an industrial site in a fully developed country and then transported to site.

The mobility of the plant can make it easier and less costly to arrange financing for the plant.

If the cost of Real Estate is very high but water frontage is available, the floating power plant can provide a cost effective alternative to the conventional land-based power plant.

The floating power plant can provide a relatively rapid answer to an increase in market demand for power in advance of new, land based plants coming on-line. Photo: 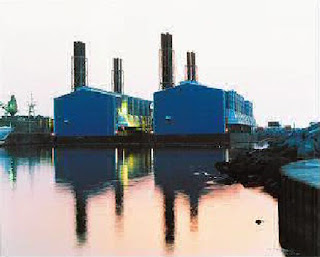 And, finally, it looks like someone at Rand looked at FNPPs back in 1972 here.

UPDATE: And some people in the U.S. have suggested FNPPs, as was referenced here:

By 1970, Westinghouse executives realized that one of the main problems in making nuclear plants competitive was the fact that they were all custom built plants. Company engineers began producing some conceptual designs for smaller, modular plants and checking the reaction of utility executives to the designs.

At Public Service Electric and Gas, based in New Jersey, the designers found some strong interest in standardized plants. However, Richard Eckert, the main proponent of such plants, had some suggestions of his own.

He suggested that the plants should be utility sized, i.e. on the order of 1000 MWe, and constructed so that they could be moored off shore. As the man in charge of finding new sites for power plants, he had discovered that there were a very limited number of sites available in areas where power demands were high. He realized, however, that many such areas were close to the ocean.

After some give and take between the supplier and the customer, the plant design that evolved was essentially a man-made island that could support two 1200 MWe nuclear plants. The power island would be fabricated in a specialized facility, maneuvered to the site and permanently moored behind a large, protective breakwater. Ideally, the plant would be located a bit less than three miles off shore and the power would be sent via underwater cables.

Westinghouse leaders recognized that they would need a partner with extensive shipbuilding experience, and attracted the participation of Newport News Shipbuilding and Drydock Company. The two companies created a 50/50 partnership company that became known as Offshore Power Systems.

The idea bloomed and was on its way but something strange thwarted it:

With all of the positives going for this project, it is important to understand why it failed. Surprisingly enough, the initiating event was the OPEC oil embargo of 1973. Typically, an event that leads to a rapid quadrupling of the price of a competitive product is good for business, but the energy industry does not follow normal rules.

The major industrial loads on the Public Service system were oil refineries and petrochemical plants located in places like Newark, New Jersey. The embargo dramatically reduced the demand for their products, so they reduced their purchases of electricity.

Since Public Service's customers needed less electricity, they did not need the capacity represented by the two large plants that they had ordered from Offshore Power Systems. Even though the purchase contracts required them to cover the supplier's costs, including those of building the manufacturing facility, Public Service desperately needed to slow down their capacity additions.

At first Public Service asked for a two year delay, hoping that the "energy crisis" was temporary, but they eventually canceled all orders.

Since the plants and the facilities that had been designed were specifically designed for the production of 1200 MWe central station power plants for the densely populated and prosperous Northeast United States, there was little hope of finding alternative customers. This was unfortunate, since many areas of the world were desperate for moderately sized, non-oil based electric power sources.

Much interesting discussion of FNPPs at a part of Nuclear.com, which includes a refernce to an shipborne nuke power plant (as opposed to propulsion) 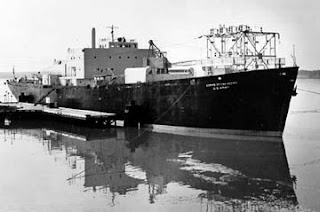 which actually was used:

The MH-1A Sturgis floating nuclear power plant, a 45-MW pressurized water reactor, was the first floating nuclear plant to be built (and the last nuclear power plant built and operated by the U.S. Army). It provided power at Panama Canal during Vietnam war years, allowing more boats to pass through the canal (2,500 a year more is the # we've seen) than otherwise would have been possible.

The ship was an old Liberty hull- more info on her here.