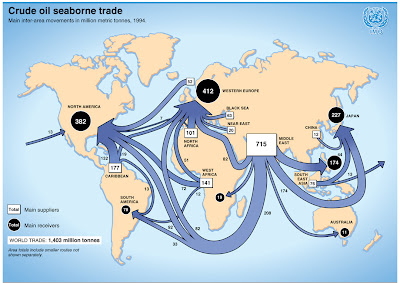 But in reality the risks to maritime flows of oil are far smaller than is commonly assumed. First, tankers are much less vulnerable than conventional wisdom holds. Second, limited regional conflicts would be unlikely to seriously upset traffic, and terrorist attacks against shipping would have even less of an economic effect. Third, only a naval power of the United States' strength could seriously disrupt oil shipments, but the United States is more likely to protect shipping on the high seas than to do anything to endanger it. Fourth, if any country attempted to interfere with international shipping, a coalition would inevitably form to keep traffic flowing with manageable damage to oil deliveries and the global economy. finally, although all-out wars between major powers can seriously disrupt maritime shipping, the chances of such a conflict happening in the foreseeable future are remote.

The quoted selection is from a preview sectton of the entire article which must be purchased from Foreign Affairs as a pdf.

More on this later, though my initial reaction is that the point is well taken, though it seems to me that there are possible temporary disruptions at certain choke points that can cause "minor" disturbances in the flow of oil. Note the Admiral Blair and the Professor use the terms "seriously upset traffic" and "seriously disrupt."