Akiva Lorenz of the ICT kindly alerted me to his essay: Al Qaeda's Maritime Threat that touches on some of the vulnerabilities of various transportation systems to Al Qaeda's asymmetric warfare, before moving to his main topic of Maritime Security.

Before looking at Mr. Lorenz's work, some background might be useful. To date there have been three major successful terrorist attacks on maritime targets. The first was the 2000 attack on USS Cole while it was making a refueling stop in Aden, Yemen. 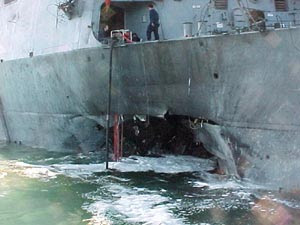 More details here. The second was the 2002 attack on the French oil tanker Limburgh 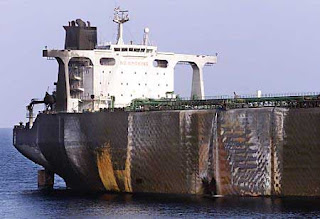 while it was anchored off Yemen. 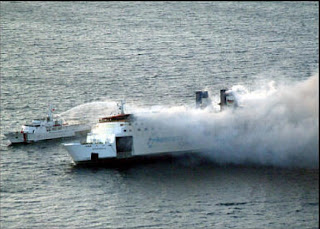 Details here. The third major attack, and probably the one least familiar to Westerners, was the 2004 attack in the Philippines on Super Ferry 14, about which more here. Mr. Lorenz uses these as stepping off points for his article.

...the grey area are cases of kidnap-for-ransom incidents, such as the May 2001 abduction of three American citizens and 17 Filipinos at the Dos Palmas resort on Palawan by Abu Sayyaf Group (ASG), an Al Qaeda affiliate. Motivated by the need to finance their political aims, ASG repeatedly perpetrated such acts of piracy. Their actions are an example of the blurring of the distinction between terrorism and piracy. (footnotes omitted)

There are numerous roadblocks that militate against terrorist organizations developing maritime capability but a few groups have surmounted those obstacles:

Of these, the LTTE has probably launched the most attacks against ships, generally using explosive laden boats in suicide attacks against Sri Lankan navy ships. Perhaps inspired by such tactics, Osama bin Laden directed that maritime operation be undertaken by al Qaeda operatives, headed by Abdul al-Rahim al-Nashiri, whose directions are well set out by Mr. Lorenz:

...al-Nashiri finally joined Al Qaeda in 1998. Shortly thereafter, al-Nashiri was tasked by Bin Laden to attack U.S. or Western oil tankers off the cost of Yemen. Having difficulties finding appropriate targets along the western coast of Yemen, Bin Laden reportedly instructed him to shift his operational arena to the port of Aden and towards U.S. navy vessels. Realizing that the average refueling stop of a U.S military vessel in the port of Aden was just less than four hours (the window of opportunity) al-Nashiri highlighted the importance of a good intelligence system based on informers. These sources were working for the Aden harbor or were posted along the Read (sic -Red) Sea. The result of his intelligence capabilities were the attempted attack on the USS Sullivan (January 2000) and the successful attack on the USS Cole (October 2000) that brought al-Nashiri an elevated status within Al Qaeda.

Later, al-Nashiri became chief of operations for Al Qaeda of the Arabian Peninsula consulting with Bin Laden while keeping operational security in selecting operatives and the formulation of new attacks. According to Michael Richardson, a visiting Senior Research Fellow at the Institute for Southeast Asian Studies, Singapore, al-Nashiri based his operation on four pillars:

· using a zodiak (sic-Zodiac) speed boat packed with explosive to ram warships or other ships;
· using medium sized boats as bombs to be blown up near slips or ports;
· using airplanes to ram boats; and
· having underwater demolition teams.

Attack plans seem to have been developed for attacks in narrow chokepoints, including the Straits of Hormuz and Gibraltar.

On the world's major sea lanes, 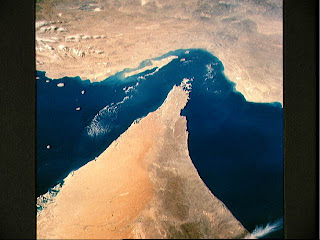 the Straits of Hormuz (top satellite photo, Iran at top) and Gibraltar (lower photo, Spain to left) rank as prime "chokepoints" - places where the available space for the movement of ships is constrained by geological factors. As discussed here and here, these chokepoints are potentially vulnerable to closure on a temporary basis by acts of terrorism or of war. 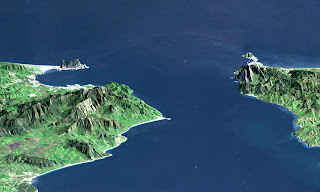 According to his interrogation, al-Nashiri, planned to attack U.S. navy ships with several speedboats launched from a mother vessel traveling on one of two one nautical mile wide channels. The plan was to detonate the mother vessel once it passed any possible target. After a final intelligence review, al-Nashiri deemed the success of such a mission was unlikely and aborted its operation. This opportunity was not al-Nashiri’s only shot, as he subsequently sent three Saudi nationals to Morocco to implement other maritime terrorist attacks. Moroccan security services arrested the three Saudi terrorists in June 2002. They were planning to attack U.S. and British navel forces with explosive loaded speed boats in the Strait of Gibraltar.... with the hardening and establishing of new security protocols for navy vessels against small boat attacks, al-Nashiri, shortly before his capture in November 2002, intended to use divers and swimmer delivery vehicles (SDVs) to attack Al Qaeda’s adversaries. Al Qaeda operatives would either plant explosives on the hull of a ship, try to sneak on board in order to hijack the ship for ransom or to be steered as a floating bomb, or use the SDV loaded with sealed explosives to function as an “underwater suicide bomber” against ships or offshore installations.

Apparently there was also consideration of using "sea mines" to hinder traffic in chokepoints.

The essay also reviews the on-going threats posed to the world's use of the maritime highways - use of containers to conceal weapons of mass destruction, or the capture of ship in a major shipping lane, threats posed by a terrorist attack on LNG tankers and the threat of action against cruise ships . Mr. Lorenz reminds of a thwarted attack off Turkey:

...cruse ships have increasingly attracted the attention of terrorists. Besides being highly iconic, Al Qaeda favors the possibility to find up to 5,000 (Queen Mary II) targets in a small, confined space. The preferred method of an attack would either be by poisoning the food or using explosive loaded speed boats to ram the cruise ship. Moreover, an important consideration is the increased probability that the victims will be of Judeo-Christian (the primary target off the jihad agenda), without risking wider Muslim interests. An example of this directive toward cruise ships occurred in August 2005. Al Qaeda operative and Syrian national Lu’ai Sakra was arrested for planning to attack Israeli cruise ships while visiting Turkey with explosive laden speedboats. (see here and here)

As you might gather, the essay is an excellent reminder of dangers posed by terrorists who might choose to use maritime assets to carry out their operations. In fact, some unsuccessful incidents just make you wonder... like this one:

PIRATES using fleet of nine fast speedboats attempted to board a chemical tanker sailing through the Gulf of Aden in broad daylight last Saturday. According to the latest weekly report from the ICC International Maritime Bureau, six speedboats doing 20 knots surrounded the tanker while it was underway. The master altered course, increased speed, raised the alarm and mustered the crew. Three more speedboats joined the attacking group.

I recommend reading the entire piece by Mr. Lorenz.