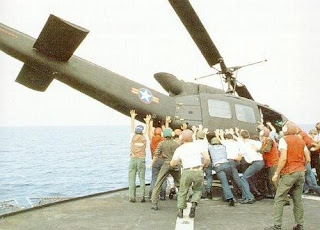 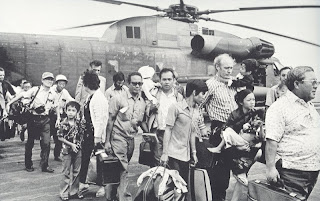 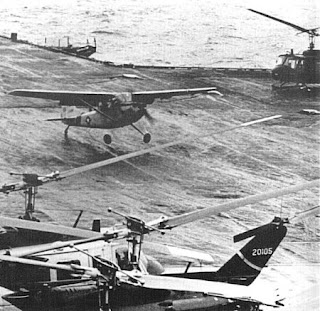 Operation Frequent Wind began on April 29, 1975. Frequent Wind was the planned withdrawal of a 100 or so remaining Americans from Vietnam as the NVA was capturing the South. It bcame more than that:

The planners anticipated they would be moving about 100 people out of Saigon, but when it was over, they had relocated 1,373 Americans and 5,595 foreign refugees.

There came a point during the night when the order was given to only take American citizens because the North Vietnamese Army and Viet Cong were getting close to the DOA compound and American Embassy.

"I can't imagine what it must have been like to have to look at those people, knowing that if they were caught they'd probably be killed," Buckel said. "As good a feeling as it must've been helping the ones they could, there also had to be a little bit of guilt there too."

And from Midway Sailor are pictures of part of the evacuation, including the pushing of a helicopter off the deck so a light plane could land.

And the famous photo of refugees lined up to try to get on "the last helo" - explained here:

Thirty years ago I was fortunate enough to take a photograph that has become perhaps the most recognizable image of the fall of Saigon - you know it, the one that is always described as showing an American helicopter evacuating people from the roof of the United States Embassy. Well, like so many things about the Vietnam War, it's not exactly what it seems. In fact, the photo is not of the embassy at all; the helicopter was actually on the roof of an apartment building in downtown Saigon where senior Central Intelligence Agency employees were housed.