Update: Aussie yacht mystery-weather not cause? 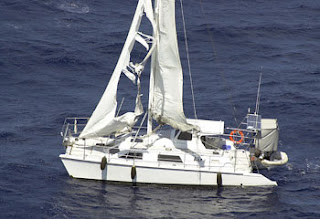 Well, now, we've got some interesting news, as set out in Weather out of yacht mystery:

THE strongest winds had passed the area where three WA men who disappeared off the north Queensland coast were sailing when they made their final radio call.

Bureau of Meteorology records for the region show that while wind speed was 20 knots at 9am on Sunday, April 15, and the next day, the winds peaked at 46 knots at about 5pm, nearly two hours before the final recorded call at 6.45pm.

Further records show that winds were consistently around this mark from about 1pm on that day, although there is no record of any rain or other events to indicate a storm. The strong winds also meant there was a high degree of visibility in the waters.
***
Queensland Volunteer Marine Rescue yesterday defended itself against allegations it was slow in informing police the men had radioed their position at 6.45pm on the day they left Airlie Beach, hours after police initially thought they had gone into the water.

The Australian revealed this week the VMR told police about the radio contact only on Monday, causing anguish to the families of the missing men who are continuing their own search of waters between Airlie Beach and Townsville.