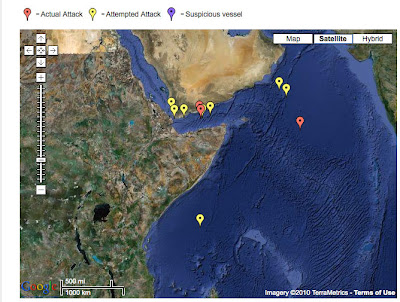 A summary of recent EU counter-piracy action from MSC(HOA): 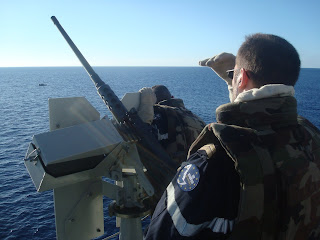 Over the weekend of 5 – 7 March, EU NAVFOR units have been involved in concerted operations to interdict and disrupt pirate action groups before they had the opportunity to pirate vessels in the Indian Ocean.

Six pirate action groups have been intercepted, mother ships and skiffs have been destroyed and over 40 pirates have been taken into custody.

As reported by EU NAVFOR on 5 March, the Force Commander of Operation ATALANTA, RAdm Giovanni GUMIERO, onboard the ITS ETNA, tasked the French EU NAVFOR Warship FS NIVOSE to intercept and disrupt the pirate attack group, which had previously been repelled by the Vessel Protection Detachment embarked onboard a French vessel. The Nivose intercepted the group of 1 mother ship and 2 skiffs and found pirate paraphernalia in the skiffs including a rocket launcher, grappling hooks and several fuel barrels. The pirates were arrested and the mother ship destroyed. 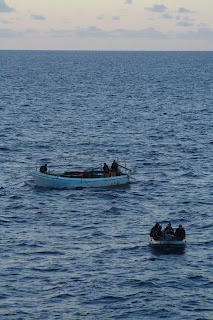 This was the start of a weekend where the Command ship ITS ETNA, FS NIVOSE and their helicopters and the Maritime Patrol Aircraft from Luxemburg, Spain and Sweden were involved in the disruption of 5 pirate action groups, including the destruction of mother ships and skiffs, and the arrest of over 40 pirates. 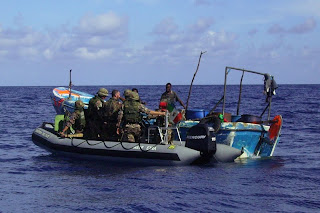 The efforts of all units and aircraft in this operation show the determination of EU NAVFOR to fight piracy in the Indian Ocean as well as the Gulf of Aden. Attacks will still happen and hijackings may still take place but this recent success ensures that there were 6 less ships hijacked over the weekend.

EU NAVFOR Somalia – Operation ATALANTA’s main tasks are to escort merchant vessels carrying humanitarian aid of the ‘World Food Program’ (WFP) and vessels of AMISOM, and to protect vulnerable ships in the Gulf of Aden and Indian Ocean and to deter and disrupt piracy. EU NAVFOR also monitors fishing activity off the coast of Somalia.