Somali Pirates: Cargo Ship Taken Off the Coast of Oman 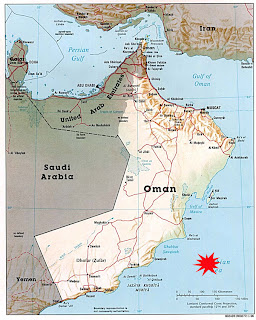 Bermuda flagged cargo ship hijacked in Gulf of Aden
23/03/2010 15.53 UTC
This afternoon, Tuesday 23 March, the Bermuda flagged Virgin Islands owned cargo ship MV TALCA was reported hijacked in the Gulf of Aden.
The hijacking took place approximately 120 nautical miles off the coast of Oman and 180 miles south of Mazera. MV TALCA was heading from Sokhna in Egypt to Busheir in Iran. It had already passed through the International Recommended Transit Corridor, which is patrolled by warships and maritime patrol aircraft from EU NAVFOR, NATO, Combined Maritime Forces and other navies. Twenty-three of the crew are from Sri Lanka, one from the Philippines and one from Syria. MV TALCA has dead weight of 11 055 tonnes. EU NAVFOR will continue to monitor the situation.

UPDATE: Added map with my guesstimate of attack location. UPDATE2: Replaced original guesstimate with another.
Posted by Mark Tempest at 3/23/2010 02:23:00 PM