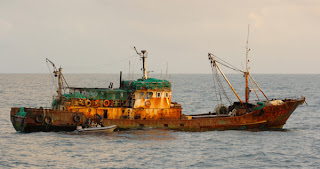 Greenpeace is happy that some big corporate food producers are joining in the cause of responsible fishing and intelligent* use of natural fish stocks, as set out in Seafood giants join forces to combat pirate fishing in the Barents Sea:

So it was good news to hear that this week eight of Europe's largest seafood companies, including Macdonalds and Bird's Eye, have united to demand better controls on pirates operating in Norway's Barents sea, the last large marine ecosystem in Europe left relatively unspoiled. In a strongly worded letter to the Norwegian government the companies called for them to provide up to date 'blacklists' of all vessels suspected of IUU (Illegal, Unregulated and Unreported - the technical terms for piracy) fishing in the Barents, where one in five cod are caught illegally.

That may be Greenpeace's idea of "piracy" - see here, but according to my dictionary, what they are really talking about is "poaching:"

Greenpeace explains its use of the word piracy:

Greenpeace considers "pirates" as primarily those fishing vessels that fly "flags of convenience" (FOC). Their vessels sometimes carry no markings at all to mask their identities at sea. Pirate companies often buy and fly "flags of convenience" from countries whose flags are for sale with no questions asked. Pirate vessels use "dummy" or "shell" companies to hide their owners' identities and go to extraordinary lengths to conceal international trade routes.

They do this to dodge fishing rules set by their own countries and the international community.

Vessels servicing FOC fishing vessels at sea (for resupply or transporting fish to market) are also pirate vessels as they ensure that FOC fishing vessels can continue to fish without restriction. This trend has been recognised by governments as a major threat to marine biodiversity.

Earlier posts on "flags of convenience" here and here. 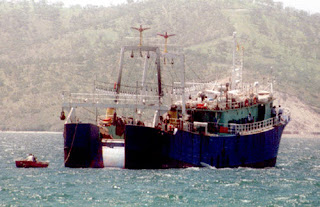 Top photo is from an Australian effort to enforce its laws against incursions of foreign boats into Australian waters. Note that the illegal boat flies no flag. Lower photo from earlier post on "fish wars."