Book Review: Terror on the Seas by Daniel Sekulich 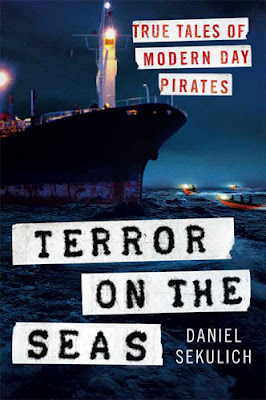 "Psst. Psssst. Hey you! - Yes, you - So, interested in pirates, are you?
Want to meet some? Want to interview one?"

If you find that a siren's song, then do as Daniel Sekulich did and get on an airplane and fly around the world to poor villages on the shorelines of the world's great sea corridors of commerce. Then announce that you want to meet a pirate or two. . .

My friend* Daniel's new book, Terror on the Seas: True Tales of Modern-Day Pirates is, at its heart, a book of the old school of adventure journalism -the sort of tale that, over a whiskey in a cozy bar, begins "There I was . . ."

The challenge in writing this book was how to get into those places where a misstep would make you into prey for criminals and yet have enough room to get back with the story. Mr. Sekulich succeeds - and takes you along for the ride.

Like any good crime story, it's not just about the criminal pirates - it's also about their victims: The honest sailor who, after being captured by pirates, is now afraid to go back to sea. The shipping and fishing companies that pay off pirate leaders to have their ships left alone. The starving masses whose food relief is caught up in the pirate ransom schemes. The fisherman who has lost his boat or nets or motor that he spent a lifetime getting . . .

In setting the scene for talking about modern piracy, Mr. Sekulich sets out a short history of this long-running low intensity conflict - a conflict in which thousands of lives have been lost, most of them slipping beneath the sea without notice.

As he moves into the modern day, you learn there are "pirate kings" in places like Somalia, where piracy has taken a corporate turn and, in contrast, there are wretchedly poor men who sneak aboard ships in the dark of night to steal whatever they can find to get enough money to put bread in their mouths.

In this book, you visit with Andrew Mwangura of Kenya - a man devoted to helping sailors, according to Mr. Sekulich. Mr. Mwangura has been accused of being some sort of agent of the Somali pirates. Mr. Sekulich has defended him against this charge.

You also have dinner with a "reformed pirate" of the Malacca Strait who talks and then dies, in an ironic reversal of the old pirate credo about dead men and tales.

This is not dry academic tome full of theory about "pirate democracy" or justifications for piracy as a result of poverty, pollution or over fishing by "others." It is a book that takes you to the beach to see piracy from that side and not just from the ships that pass by the pirate shores.

It helps that Mr. Sekulich knows something about ships. He can distinguish the bow from the stern and grasps the vital role in the world economy these hunks of metal play.

It's a very good read.

*We have never met in person, but exchange frequent emails and have been interviewed together for a radio program. Daniel and I comment on each other's blogs. His blog is Modern Day Pirate Tales.
Posted by Mark Tempest at 7/10/2009 09:00:00 AM