During World War I, the U.S. Navy found that it needed some smaller ships to operate farther off shore than the converted yachts and other wooden hulled vessels it was using as "submarine chasers." Major shipyards were busy building destroyers and other major ships, so the government called on Henry Ford:

Naval officials believed only a steel ship could successfully combat the U-boat menace. Such a craft would have to be designed so that its component parts would not require the steel needed for other war purposes. The new subchaser would have to be large and rugged enough to withstand the North Atlantic weather and fast enough to catch a submarine.

A major problem facing the U.S. Navy was finding a company that would undertake the ta 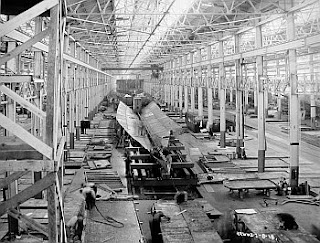 sk of manufacturing a ship of this kind. In February 1918 Secretary Daniels asked Henry Ford if the automobile giant would put his resources to work building subchasers. Ford reportedly asked Daniels, "How quick do you want them?" The secretary replied he wanted deliveries to begin by summer and one hundred vessels completed by the end of the year.

Ford accepted the challenge but carefully weighed the difficulties of such a project. In less than four months he would have to construct a new plant, devise ways to fabricate the ships and invent special tools to produce and assemble the crafts. Ford had never built a ship, but he was a master of his art and believed he could produce at least one vessel a day once the factory was in full operation.

In three weeks the Navy Department created a design for the vessel, designating the subchaser as the Eagle class. A model was soon tested for stability and speed. Meanwhile, Ford began constructing a factory. In May 1918 the first keel was laid.

mass production of something never produced in mass before -ships:

Ford's plan for building the ships was revolutionary. Establishing a new plant on the River Rouge on the outskirts of Detroit, he proposed to turn them out as factory products, using mass production techniques, and employing factory workers. He would then send the boats by the Great Lakes and the St. Lawrence River to the Atlantic coast. However, Ford had little part in the design of the boats. Except for his insistence upon simple plans and the use of steam turbines, he contributed little of a fundamental nature to the design concept. 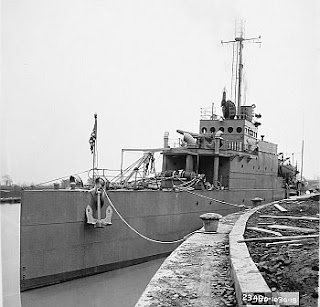 The assembly plant was completed in five months, and the first keel was laid in May 1918. The machinery and fittings were largely built at Ford's Highland Park plant in Detroit. At first, Ford believed that boats could be sent down a continuously moving assembly line like automobiles. The size of the craft made this too difficult, however, and a "step-by-step" movement was instituted on the 1,700-foot line. The first Eagle boat was launched on 11 July. The launching of these 200-foot craft was a formidable operation. Not built on ways from which they could slide into the water, the hulls moved slowly from the assembly line on enormous, tractor-drawn flatcars. They were then placed on a 225-foot steel trestle alongside the water's edge which could be sunk 20 feet into the water by hydraulic action.


The original contract called for delivery of 100 ships by 1 December 1918. Although the first seven boats were completed on schedule, succeeding ones did not follow as rapidly, even though the labor force reached 4,380 by July and later peaked at 8,000. The chief reasons were Ford's excessive initial optimism and the inexperience of labor and supervisory personnel in shipbuilding. 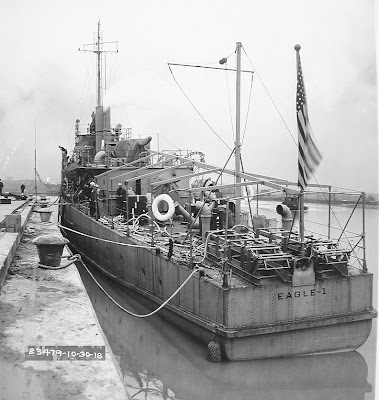 Oh, and that "Eagle" name? Explained :

The term "Eagle Boat" stemmed from a wartime "Washington Post" editorial which called for "...an eagle to scour the seas and pounce upon and destroy every German submarine."

How did the Eagle ships do? It seems not much - WWI was pretty much over when they came online. Some were sent to Russia to help withdraw U.S. forces in 1919.

Of the 60 built, a few became aircraft tenders, several were transferred to the U.S. Coast Guard and others were used for odd jobs until sold or sunk as target ships.

Among the Navy survivors some served into World War II, including USS Eagle 56, which, however, apparently blew up and sank off the coast of Maine on 23 April 1945.

At the time, the explanation of its sinking was that it suffered boiler explosion. 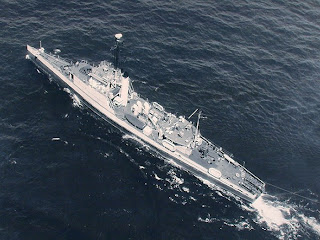 Many years later it was confirmed she was sunk by a German U-boat. 49 men were lost, 13 rescued. The research that revised the explanation helped by a Navy Historical Center researcher.

The Ford facility they were built in became famous as the Ford River Rouge plant.

There appears to be model kit available.