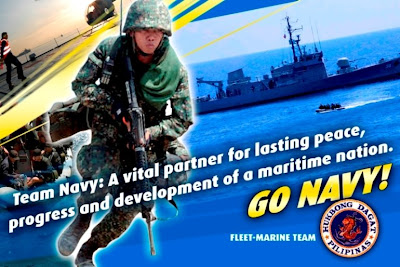 Philippines to Send Anti-Piracy Liaison to join forces off Somalia. As set out here:

The Philippine government has designated a Philippine Navy officer to act as liaison to the multinational task force conducting maritime security and anti-piracy operations in the Gulf of Aden.

The Department of Foreign Affairs (DFA), however, would not name the officer until his actual deployment in Manama, Bahrain where he would work with the Anti-Piracy Task Force under the United States 7th Fleet.

The appointment of a naval liaison was an initiative of Vice President and presidential adviser on overseas Filipino workers Noli de Castro as the Philippines’ contribution to international efforts to stem piracy.

De Castro cited the “urgency” in assigning a Filipino naval attaché in the Anti-Piracy Task Force to help monitor the condition of Filipino seamen held hostage by the pirates and immediately coordinate assistance to the seafarers.

He said the assignment of a naval attaché also aims to establish a command that will provide guidance and safety instructions to vessels with Filipino crewmembers, passing the danger zone of the Gulf of Aden.

A large number of Filipinos are being held captive by Somali pirates.