Not So Much Breaking News: Afloat Nuclear Power Plants 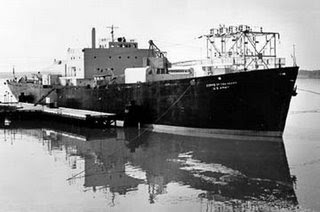 There are a lot information, even in her own report, available contrary to the breathless ignorance of "Ariel Schwartz" who claims credit for the bit of misinformation titled Radiation on the High Seas: First Floating Nuclear Power Plant Due in 2012, in which she writes:

Nuclear power is one of the most controversial energy-generating methods, mainly because of safety and terrorism concerns. But that hasn't stopped the United Industrial Corporation, a Russian manufacturer, from pressing forward with plans to build the world's first floating nuclear power plant. When completed in 2012, the plant will provide power to the town of Viluchinsk, a city and atomic submarine base on the Kamchatka peninsula (emphasis and italics added by E1.)

As most of us know, those "atomic submarines" are - shock and horror- both "nuclear powered" and, for the most part, "floating." Yes, that's nuclear powered propulsion as opposed to powering street lights, but even so ...

It is unclear what sort of power Ms. Schwartz thought was "atomic."

Even worse for here, a little research would have revealed at least one other "floating nuclear power plant" dating back to the 1960's - the MH-1A Sturgis, pictured above:

The MH-1A Sturgis floating nuclear power plant, a 45-MW pressurized water reactor, was the first floating nuclear plant to be built (and the last nuclear power plant built and operated by the U.S. Army). It provided power at Panama Canal during Vietnam war years, allowing more boats to pass through the canal (2,500 a year more is the # we've seen) than otherwise would have been possible.

Built during WWII as the Liberty Ship SS Charles W. Cugle, this vessel was purchased by the US Army in 1965 and underwent conversion to house an experimental Nuclear Reactor as part of a feasibility study on the potential usefulness of mobile, floating nuclear power plants.

The ship was renamed Sturgis and had the experimental MH-1A Nuclear reactor installed into its hull in 1966, which became operational in 1967. The ship was towed to Fort Belvoir where it's reactor was tested and showed it was able to continually and safely produce up to 45 Megawatts of power. Following its testing period, the ship was towed from Fort Belvoir to the Panama Canal, where it was stationed inside the US-controlled Canal Zone and provided power to the Canal Locks and operating systems from 1968 to 1976.

Budget cutbacks in the US Army, the high price of maintaining the vessel and an upcoming nuclear refueling led the US Army to remove the Sturgis from the Panama Canal and shut down the MH-1A reactor in 1976. The ship was brought to the Reserve Fleet at Fort Eustis where she was stripped of her Nuclear Fuel and sealed off to prevent any potential contamination to the surrounding areas. She is presently maintained by the US Army Corps of Engineers and is slated for disposal, most likely through the US Navy's Nuclear Ship & Submarine Recycling Program (NSSRP) at Bremerton, WA.

And my own humble post on the topic from 2 years ago referencing an even earlier Popular Science report. PopSci had doubts, too, but safety shouldn't really be an issue.