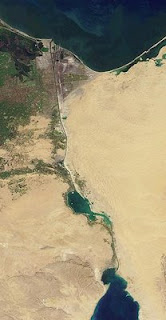 Egyptian authorities have arrested 25 al-Qaida-linked terrorists on suspicion of plotting attacks on oil pipelines and ships crossing the Suez Canal.

The Egyptian Interior Ministry said the new cell was led by a Palestinian and included 24 Egyptians, mostly engineers and technicians.

They planned to use mobile phones to detonate explosives against ships crossing the Canal, the statement said.

The group learned how to make car bombs through communicating with al-Qaida terrorists on jihadi Web sites, according to an Interior Ministry statement. 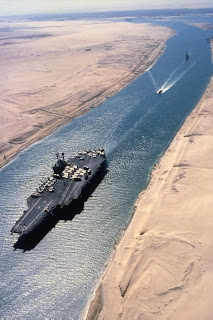 Last year it was reported that Egypt was planning to place cameras along the Canal:

The Suez Canal is Egypt’s third largest source of revenue after tourism and remittances. Currently about 7.5 percent of global trade passes through it.

More on the Canal from EIA World Oil Transit Chokepoints:

The Suez Canal is located in Egypt, and connects the Red Sea and Gulf of Suez with the Mediterranean Sea. The Canal is one of the world’s greatest engineering feats covering 120 miles. Oil shipments from the Persian Gulf travel through the Canal primarily to European ports, but also to the United States. In 2006, an estimated 3.9 million bbl/d of oil flowed northbound through the Suez Canal to the Mediterranean, while 0.6 million bbl/d travelled southbound into the Red Sea.

Over 3,000 oil tankers pass through the Suez Canal annually, and represent around 25 percent of the Canal’s total revenues. With only 1,000 feet at its narrowest point, the Canal is unable to handle large tankers. The Suez Canal Authority (SCA) has discussed widening and deepening the Canal to accommodate VLCCs and Ultra Large Crude Carriers (ULCC).

The 200-mile long Sumed Pipeline, or Suez-Mediterranean Pipeline, also provides a route between the Red and Mediterranean Seas by crossing the northern region of Egypt from the Ain Sukhna to the Sidi Kerir Terminal. The pipeline provides an alternative to the Suez Canal, and can transport 3.1 million bbl/d of crude oil. In 2006, nearly all of Saudi Arabia’s northbound shipments (approximately 2.3 million bbl/d of crude) were transported through the Sumed pipeline. The pipeline is owned by Arab Petroleum Pipeline Co., a joint venture between EGPC, Saudi Aramco, Abu Dhabi’s ADNOC, and Kuwaiti companies.

Closure of the Suez Canal and the Sumed Pipeline would divert tankers around the southern tip of Africa, the Cape of Good Hope, adding 6,000 miles to transit time.