From the Maritime Liaison Office in Bahrain (where the mission is "liaison between the Coalition Maritime Forces in Bahrain and the commercial shipping industry") comes forth their June 25, 2009 MARLO Newsletter, available here (except, as of this morning, the June newsletter is not yet posted. You can get on the MARLO email list and they'll send it to you via email).

Southwest Monsoon and Somali Piracy
The annual Southwest (SW) Monsoon generally occurs from the end of May to the beginning of September over the western Indian Ocean. In the past, the monsoon has led to a decrease in piracy activity along the east coast of Africa. However, in light of the adaptive nature of recent Somali piracy attacks, a break in pirate activity should not be assumed.

Still, commercial vessels should take advantage of the protection offered by monsoon conditions along much of the east coast of Africa, where wind speeds are SW Force 4 or above. It is believed that the likelihood of a successful piracy attack in these weather conditions is low, though attacks cannot be discounted and ships should continue to be vigilant and observe industry best
management practice. Routing through areas where the wind speeds remain
above Force 4 is likely to offer protection from successful piracy attacks.

The link set out in the newsletter is not a good one, by the way.

UPDATE: Speaking the weather, a couple of quick looks at the winds in the Gulf of Aden and off the east coast of Somalia (from here: 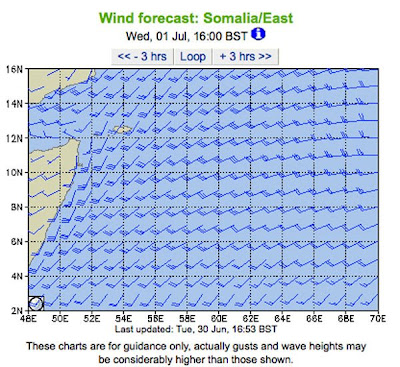 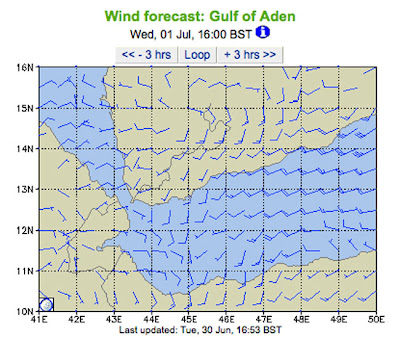 Email ThisBlogThis!Share to TwitterShare to FacebookShare to Pinterest
Labels: Gulf of Aden, Marlo, Weather and Pirates