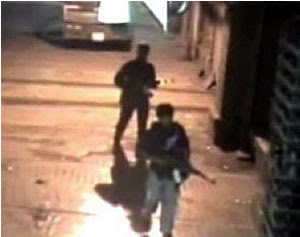 I pondered a little while on whether or not to link to the Channel 4 Report found at Gates of Vienna as Mumbai Revisited.

On one hand, I hate spreading terrorist hate.

On the other hand, it's important, though brutal, watching. There are a vast number of lessons to be learned if the show is analyzed properly.

Could this happen in the U.S. - if a small group of terrorist landed, say, in Miami or Charleston or Norfolk or San Diego or ...?

Are our police, with far better equipment (and can we presume? -better training) than the guards in the railway station capable of putting quick stop to this sort of quick hit action? With SWAT units available in nearly every city and county, trained to paramilitary standards, would we have responded faster? Or will the techniques used by the terrorists in spreading out their attacks and use of delayed fuze bombs create enough of "fog" that 185+ could die as in Mumbai.

To what extent, if at all, would an armed citizenry have been able to slow down or stop the attacks?

Before getting too sure of your responses to those questions, remember that a single gunman killed 32 people at Virginia Tech.

A RAND report on the Mumbai attack, "The Lessons of Mumbai" can be read here:

The dispersal of the attackers into separate teams indicates an effort to reduce operational risk. Once the attack began, the failure or elimination of any single team would not have put the other teams out of action. The only possible point of failure for the entire attack was while the terrorists were still at sea on their way to Mumbai.

Gaps in Coastal Surveillance. The attacks highlighted India’s inability to effectively monitor its coastline—a condition that is common to many littoral states in both the developing and the developed world.

Speaking of monitoring your coastline, there's an interesting article in the latest issue of the U.S. Naval Institute's Proceedings, "Looking for Anomalies in All the Wrong Places" by LT Mark Munson- in discussing Maritime Domain Awareness analysis that looks for "anomalies" to suggest suspicious activity worth investigating, LT Munson points out that it's not always (maybe even rarely) the "anomalies" that bite you (footnote numbers deleted):

The fundamental flaw with this premise is the assumption that maritime terrorism or other illicit maritime activities are correlated with suspicious, illegal, or unusual behavior. A review of recent maritime terrorist acts demonstrates that this is clearly untrue. The boat used to attack the USS Cole (DDG-67) in Yemen in October 2000 was bought (not stolen) in the Saudi port of Jizan. The "most destructive act of terrorism in maritime history," the bombing of Superferry 14 in the Philippines in 2004, was conducted by a passenger who concealed the explosives in a television he brought aboard. Better security and safety practices on board Filipino ferries may have prevented that attack (or saved lives), but there was nothing anomalous about how the attack happened. Until they turned to ram the structures, there was nothing particularly unusual about the boats that attempted to strike the Al Basra and Khor al Amaya oil terminals in April 2004, killing three U.S. servicemen in the Persian Gulf.

In November 2002, al Qaeda-affiliated terrorists used small boats to escape after attempting to shoot down an Israeli airliner and destroying a hotel near Mombasa, Kenya. Such travel was not at all unusual in a region where small craft are commonly used to move along the East African coast. Loai Saqa, a Syrian associate of Abu Musab Zarqawi, was arrested by Turkish authorities in August 2005 while reportedly planning to attack Israeli cruise ships. The Turks were led to Saqa not through unusual maritime behavior, but because of an explosion and chemical fire in an apartment where attack preparations were being conducted. All accounts of the interrogations of the lone surviving gunman from the November 2008 attacks in Mumbai, India, indicate that the attackers traveled on board at least two vessels from Pakistan to Mumbai, hijacking at least one of them along the way. It is unclear, however, whether even a perfect, NORAD-like system for maritime traffic control would have detected that the routes used by those ships to transport the attackers to India were somehow anomalous.

The good Lieutenant could have added that the Mumbai terrorists arrived off the coast of India in an Indian vessel, thereby presumably "normalizing" their arrival - and making them invisible to anomaly analysis.