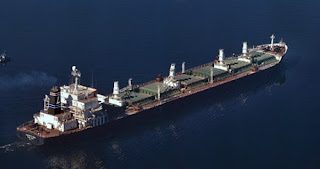 The headline is a little misleading - National Journal Online - Congress Moves To Protect Shippers From Piracy - since it's bill that has only passed the House. As you will read in the article, some don't agree that sending Marines to sea on merchants is the very best answer to the problem:

Enter Amendment No. 24 -- part of the $550 billion National Defense Authorization Act -- which would require the Defense Department to put small teams of four or five Marines on American-flagged ships carrying U.S. cargoes. The House approved the bill June 25, while the Senate has yet to move on it.

Ship owners, many of whom have been paying insurance premiums of $40,000 to $60,000 per transit through Somali waters, are ecstatic.

"This bill recognizes that there is an inherent need for the U.S. government to protect American-flagged ships in the region," said Philip Shapiro, president and CEO of New York-based Liberty Maritime Corp., whose ship the Liberty Sun was attacked April 14 but managed to escape.

"There is no doubt in our minds that putting armed soldiers on board is a highly effective solution and it will definitely prevent hijacking of the vessel," said Per Gullestrup, CEO of Copenhagen-based Clipper Projects, who negotiated the release of his ship CEC Future and its 13 crew members after pirates captured it last fall. None of his ships stand to benefit from the legislation, but Gullestrup has been an advocate for stepped-up international military assistance.

First, if the government charges for the services of the Marines, as it ought to in my opinion, the price will be over $40k per ride, counting per diem, travel, pay and allowances, etc.

Second, it only applies to some ships:

The legislation won't cover every ship sailing through the Gulf of Aden or off Somalia's Eastern coast that flies the Stars and Stripes. In a given year, 54 American-flagged ships travel the region, 40 of which carry humanitarian aid cargo from the federal government. But of those, fewer than 10 are small enough or slow enough to be at risk of attack and require Marine embeds, according to the U.S. Maritime Administration.

Third, this may not be the least expensive option:

... Pham argued that the U.S. could largely dodge piracy if the government purchased grain in East Africa instead of shipping food from the U.S. But shipping and agricultural interests have successfully blocked a policy shift toward sending local grain overland. Liberty Maritime has spent $229,000 on lobbying so far this year and the industry has a whole over $6 million, according to the Center for Responsive Politics.

"There wouldn't be the Maersk Alabama and others if we didn't buy grain in the U.S. and chug it halfway across the world," Pham said. "If that grain was purchased locally in Africa, there wouldn't be this shipping issue."

Finally, as Pham also notes the probability of attack on a U.S. ship is pretty low.