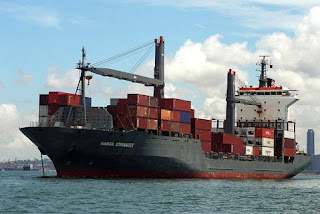 Greed is not good - especially for the crew of a merchant ship held by Somali pirates - as reported in "Hostage talks stall after Somali pirates up demands":

The imminent release of 24 hostages on board a German ship hijacked off Somalia in April has been delayed after pirates demanded a higher ransom, a gang member said yesterday.

The German-flagged container vessel Hansa Stavanger with five Germans, three Russians, two Ukrainians and 14 Filipinos had been expected to be released on Monday.

The pirates had agreed to a US$3 million ransom, but some members of the gang said that was too little, a pirate named Hassan told Reuters.

'Some of our friends say we are many and so the Germans must add US$1 million or US$500,000 to make the ransom about US$4 million,' he told Reuters by phone from Haradheere, about 17 kilometres west of Gan, where the ship is being held.

'The Germans seemed to be angry after we broke the promise. They rarely answer our calls. Now they insist on the agreed US$3 million, but we are divided on this issue. We do not know how long it will take to release the ship,' he added.

Pirates without honor. Who would have guessed?

Some may recall the pirates used Hansa Stavanger to attempt to find their pirate brethren holding Captain Philips during the standoff involving Maersk Alabama.
Posted by Mark Tempest at 7/29/2009 07:54:00 AM