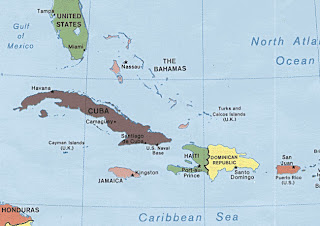 While authorities in the island fear that it was yet another smuggling operation gone array -- the tiny British-dependent island chain is a popular route among Haitian smugglers trying to get to South Florida from Haiti's north coast -- Johnson said, ``We are unsure if it's a smuggling venture.

``Right now, we are concentrating on locating an estimated 85 people that may still be missing,'' she said.

More info from Coast Guard News. And here. And from a Coast Guard Headquarters press release:

The U.S. Coast Guard is assisting Turks and Caicos authorities as they rescue up to 70 Haitian migrants who are stranded on a reef after their vessel capsized and sank.

It is estimated that 160 to 200 people may have been onboard the vessel when it capsized. 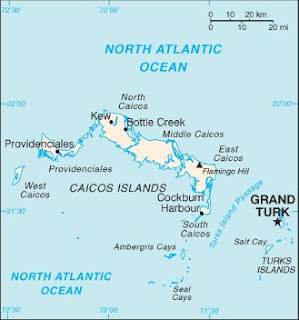 An HH-65 helicopter from Air Station Miami is on scene and searching for survivors in the water.

A report on the allegedly "growing" problem of Haitian people smuggling to the Bahamas here:

More than two hundred Haitian economic refugees who came ashore in three separate groups last week are believed to be a part of a smuggling ring.
***
Officials believe that migrants are coming to The Bahamas because the economic situation is worsening in the region, particularly in northern Haiti.

UPDATE: A site on the Haitian "disaspora in the U.S." here offers up this map of the migration route:

The boat, believed to be a shoddily built sail freighter 30 to 50 feet long, had been heading north from Haiti.

Survivors said the boat had departed carrying 160 people and had picked up 40 more before sinking, according to Coast Guard officials. All were believed to be migrants. Most of the missing passengers have probably drowned.

“We’re getting reports of 20-knot winds and six-foot seas out there,” said Petty Officer Jennifer Johnson, a Coast Guard spokeswoman in Miami. “If you put 200 people on a vessel that’s 30 or 40 feet, it’s bound for disaster.”

The sinking is potentially one of the worst disasters in years to strike Haitians fleeing the destitution of their country, the poorest in the Western Hemisphere. If no other survivors are found, the death toll will be the largest since at least 2007, when about 80 Haitians drowned or were eaten by sharks after their boat capsized near Turks and Caicos with 150 people aboard.

MIAMI - An HH-60 Jayhawk helicopter crew from Coast Guard Air Station Clearwater, Fla., deployed in support of Operation Bahamas Turks and Caicos, rescued a Haitian migrant Monday after his boat capsized and sank near West Caicos Island, Turks and Caicos Islands. The migrant was one of an estimated 200 people aboard the grossly overloaded vessel. Of the 200 aboard, 118 have been rescued and 15 have been recovered deceased. (USCG video)