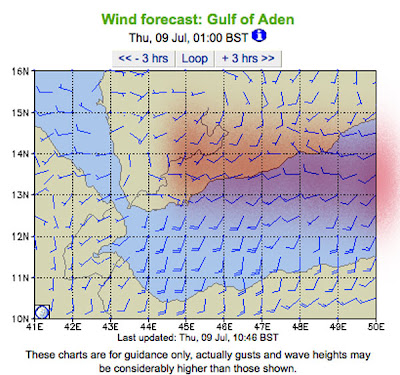 Conventional wisdom is that the Somali pirates don't attack often during monsoon season. However, as the recent capture of a Turkish ship indicates, there are exceptions. But the question that must be answered is "Why now?" - and the answer is with the winds. Look at the winds under the "red smear" I put on the wind chart above - the winds are about 10 knots - a range in which the Somali pirates operate - and the lowered winds are smack dab on the "secure" transit lane.

In short, weather - even during monsoon season - is sometimes favorable for pirates in small boats, and now is such a time. Ships transiting the area should keep alert.