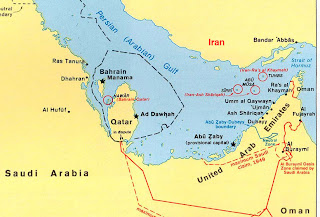 Report of an attack on a dhow in the area between UAE and Bahrain in Ship with Indian crew attacked by pirates in the Gulf:

A traditional wooden ship with Indian crew sailing from the United Arab Emirates toward Bahrain was the target of the first act of sea piracy reported in Persian Gulf waters in years, according to details of the attack that emerged on Sunday.

The Bahraini dhow was intercepted on Friday night by another ship with an armed crew, security sources said.

The four pirates threatened the six-man Indian crew with guns and assaulted them before taking their cargo of fish and mobile phones, sources said. The crew members said they believed the pirates were Iranian, but their nationality could not be positively confirmed.

The Indian sailors were unharmed. They were released and arrived in a Bahraini port on Sunday.

The case represents the first time an act of piracy has been reported inside the Gulf since the issue of piracy again came to the forefront of international attention off the Somali coast in recent years.

UPDATE: Speaking of Iran, the Iranian Navy is making another deployment to the Arabian Sea to counteract pirates, as set out here. Meanwhile, the IRGC "navy" asserts "mission accomplished" as a result of its deployment to the Gulf of Aden:

The IRGC Navy completed its trans-regional mission to provide security for the Iranian commercial ships in the Gulf of Aden, brigadier general Ali Fadavi said in a ceremony to welcome the naval unit.

During the 107-day mission, tens of Iranian and non-Iranian ships safely sailed across the Gulf Aden and pirates never dared to approach any commercial ships, Fadavi added.

He said the IRGC used special tactics to foil the pirates'' attacks on the Iranian ships; he added the IRGC once again proved its capability in establishing security outside Iran’s geographical borders.

The general went on to say that the U.S. and European countries have failed to repel the piracy threat facing their vessels, while their advanced naval fleets are present in the region.