There was a time when presidents of the United States, in order to get away from Washington, would get underway on "presidential yachts" and cruise the Potomac River.

While the story of those yachts is for another Sunday, one of the interesting aspects of having a president heading out on a yacht is providing some form of mobile protection for the presidential yacht - something akin to the escort vehicles that flank the presidential limousine but on the water.

There was a time (and more about this will appear here soon) when the U.S. Navy had high speed torpedo boats which were used to engage enemies at sea or in littoral waters and for other missions (see here). Most of the WWII PT boats were wooden hulled. Following WWII, the Navy decided to experiment with aluminum hulls and built 4 PT boats for experimental purposes.

One of these new metal hulled boats played a role in presidential protection. PT-809 vitals:

The PT Boat served an additional function, too:

The Guardian carried 2 16 ft fiberglass water jet boats. These boats were used to transport secret service agents and was used for water skiing by Mrs Kennedy and other guests. 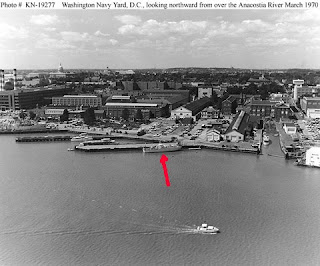 When not in use by the president the yacht and the escort PT moored at the Washington Navy Yard.

View looking northwards from over the Anacostia River, March 1970.
The Presidential Yacht Sequoia and her Secret Service protective craft, Guardian (formerly USS PT-809), are alongside the finger pier in the center. The bathyscaphe's Trieste is on display in the parking lot immediately above and between those two vessels.
Photographed by PHC Tommy Cobb.

PT-809 served her country well and long. Give a little salute to the men who helped protect presidents - recover drones and deliver SEALS. Not too shabby for an "experiment."
Posted by Mark Tempest at 8/30/2009 11:36:00 PM