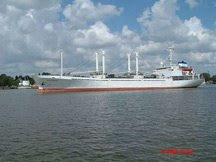 Five Lithuania crew members have been taken hostage from a cargo ship off the coast of Nigeria, the Baltic state's foreign ministry said Tuesday.

The ministry said in a statement that according to available information none of the crew of the Lithuanian-flagged refrigerator vessel Saturnas had been injured in the attack by unidentified perpetrators.

The current location of the hostages was unknown, the ministry said.

"The ship has not been damaged, it has not been pirated," company president Vytautas Lygnugaris was quoted as saying by the Lithuanian-based Baltic News Service.

Pirates grabbing people off Nigeria is not something new.