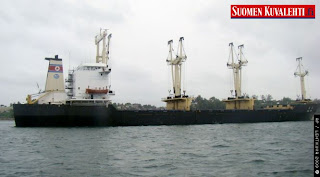 Off the Andaman Islands, a North Korea "merchant" ship has dropped anchor after being pursued by Indian forces, as reported India inspects North Korea ship:

In this photo released by the Indian Coast Guard on Sunday, Aug. 9, 2009, North Korean cargo ship MV Mu San is seen in Port Blair, India. The coast guard detained the ”suspicious” ship, which had dropped anchor without

permission Wednesday, Aug. 5, 2009 in an island in the Andaman and Nicobar group, after a six-hour chase off the country’s southeastern coast, a coast guard official said Saturday, Aug. 8, 2009 but a preliminary search of the vessel revealed it was carrying sugar and not illicit cargo.

The newspaper quoted K. R. Nautiyal, an officer of the Coast Guard at Andaman and Nicobar Region, as saying that "several things were amiss" about merchant vessel MV Musen, which later declared that it was carrying 16,500 tons of sugar from Thailand to Umm Qasr in Iraq.

The merchant ship shouldn't have dropped anchor in the Indian island in the first place and it didn't respond to signals from the Coast Guard. The ship's log book was found to be vague, the report quoted the officer as saying.

Musen had dropped anchor off Hut Bay island Wednesday afternoon for which it had no permission. When Coast Guard ship Kanakalatha Barua approached it, Musen tried to escape, forcing coast guard men to fire in the air, according to the report.

The ship finally "obeyed", and was brought to Port Blair early on Thursday, according to the report.

Investigation by Integrated Command of Andaman and Nicobar Island’s officials has revealed that the detained suspicious North Korean Ship MV Mu San made several voyages to China without maintaining proper records. North Korea, now facing sanctions for allegedly building nuclear arms, has been a beneficiary of Chinese material and research.

The Indian Coast Guard detained the MV Mu San with its 39 crewmembers on board late on Friday in the Indian Ocean after it dropped the anchor at Hut Bay, without the permission of the Indian authorities. Indian intelligence agencies also investigating the reason why the ship berthed in Singapore on June 30, though it was not a port of call in the logbook. MV Mu San, which left Laem Chabang port in Thailand on July 27, reached Singapore on July 30 and left for Hut Bay on July 31. But the passports of the crew were not stamped in Singapore, sources said.