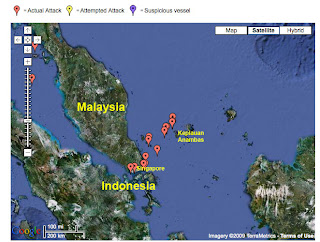 On 2 Aug 2009 at about 0130 hrs (local time), a Singapore-registered tug boat, Tahir towing barge, Baran was underway in the South China Sea when five robbers armed with parangs and machetes boarded the tug boat from a small boat. The tug boat had departed Vietnam and was enroute to Singapore.

The crew fought off the attack, though the tug's master was slightly wounded.

The pattern of pirate attacks has shifted since the international patrols of the Strait of Malacca started. You can see that the new "major" attack area is off the east coast of the western part of Malaysia near the Indonesian Islands of Kepulauan Anambas. 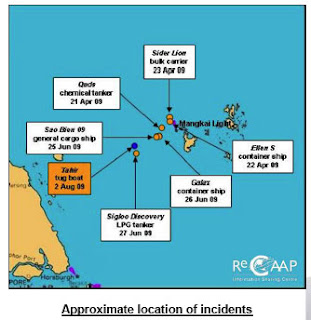 The satellite based image is from the IMB Live Piracy Map. The incident map was liberated from the ReCAAP report on the incident which can be downloaded here. The ReCAAP report notes this is the 7th piracy incident in the area since the start of the year. The map shows all 7. Click on them to enlarge.

"The Regional Cooperation Agreement on Combating Piracy and Armed Robbery against Ships in Asia (ReCAAP) is the first government-to-government agreement to enhance the security of regional waters."