Pirate Fighting: My other boat is a destroyer 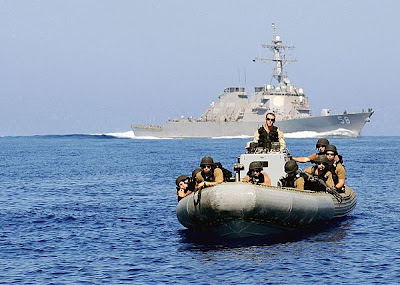 RED SEA (July 6, 2009) A visit, board, search and seizure team from the guided-missile destroyer USS Laboon (DDG 58) conducts training in preparation for Operation Allied Protector, NATO's counter-piracy operation. Laboon, along with ships from Greece, Italy, Turkey and the United Kingdom, is actively patrolling the Gulf of Aden area, with a focus on deterring and disrupting piracy as well as protecting vulnerable shipping assests in the region. Laboon is deployed in direct support of Standing NATO Maritime Group 2. (U.S. Navy photo/Released)