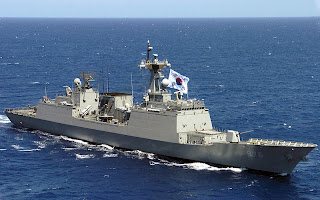 Reports that a South Korean forces saved a merchant ship under attack by Somali pirates here:

In the seventh operation of its kind, a group of 30 UDT/SEAL forces aboard rigid inflatable speedboats, backed by a Lynx attack helicopter, seized seven pirates trying to hijack the cargo ship in the Gulf of Aden. They conducted the operation at the request of the Combined Task Force (CTF) 151, a multinational naval task force to combat piracy in the Somalia littorals.

It was the first time that South Korean forces of the Cheonghae unit have captured pirates on a ship. Previous operations aimed at driving away suspected pirate boats from commercial ships used warning shots fired by the unit's only Lynx helicopter. 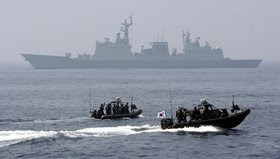 The pirates were released after being given warnings, JCS officials said.

Accoring to this, the Korean destroyer involved was Munmu the Great, a Chungmugong Yi Sunshin class destroyer.

More about the "Cheonghae unit" here.

UPDATE: So long as we're at it, here's a Somali pirate update:
10 ships held:

SERENITY: The catamaran sailing for Madagascar from the Seychelles with three people aboard, was seized in March 2009.

INDIAN OCEAN EXPLORER: Seized March 2009. The 35-metre boat was built in Hamburg as an oceanographic research vessel. It accommodates about 12 passengers. Pirates have freed the seven crew.

BUCCANEER: Seized April 11, 2009. The Italian tugboat, owned by Micoperi Marine Contractors, was carrying 10 Italians, five Romanians and a Croatian, and was seized towing two barges while travelling westbound through the Gulf of Aden.

IRENE E.M.: Seized April 13, 2009. The St. Vincent and the Grenadines-flagged Greek-owned bulk carrier was hijacked in the Gulf of Aden. Its Filipino crew of 21 was unharmed.

ARIANA: Seized May 2, 2009. The Ariana was seized north of Madagascar en route to the Middle East from Brazil. The 24-strong Ukrainian crew were said to be unhurt. The ship, flying a Maltese flag, belongs to All Oceans shipping in Greece. A Ukrainian ship was hijacked on the same day in the Indian Ocean with a cargo including U.N. vehicles. Maritime officials were unable to confirm this seizure.

Weather/winds - hot and windy - still in monsoon wind situation, which is reducing attacks. 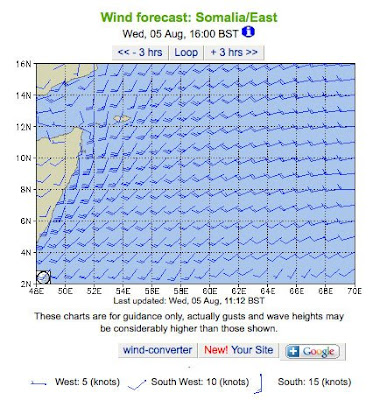 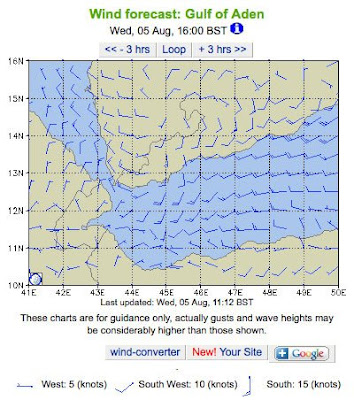 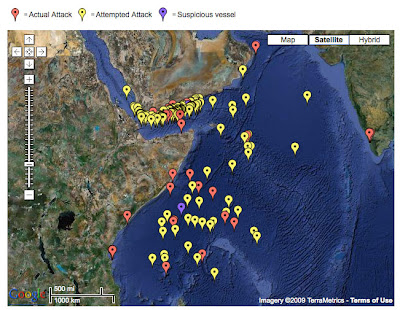 And, finally, a report of an incident in the Gulf of Aden from a couple of days ago:

03/08/2009 17.53 GMT
Pirate Attack
GOA (13 45 N,050 43 E)
---WARNING WARNING WARNING---
At 1522 UTC a Merchant vessel reported to be under attack by 2 skiffs in position 13 45 N 050 43E.
The Merchant vessel is now safe.
A naval unit has reached the area to investigate.
While navigating in the region vessels are urged to operate at a heightened state of readiness, maintaining strict 24 hour anti-piracy visual and radar watches, actively implement recommended anti-piracy measures and regularly report their position/course/speed to UKMTO. 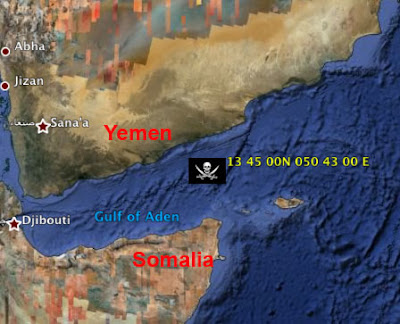